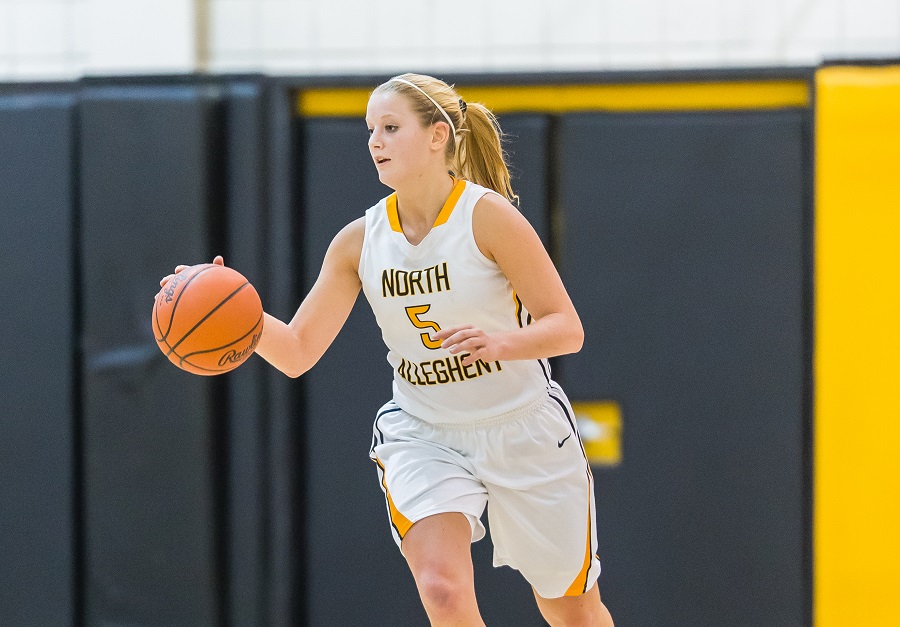 Tigers Fend Off Norwin, Move On To State’s Final Four

The third time was the charm for the North Allegheny girls’ basketball team in the PIAA quarterfinals as the Tigers knocked off the previously unbeaten Norwin Knights, 50-43, at Penn Hills High School. The Knights defeated North Allegheny in their prior two matchups this season, including a come-from-behind effort in the WPIAL championship. Norwin again tried to rally from a major deficit against the Tigers on Friday night but this time North Allegheny held on to reach state’s final four for the second time in the last three seasons.

North Allegheny stormed out of the gates to take a 7-0 lead and built a 20-8 advantage in the early stages of the second quarter. On her way to a 14 point night, senior Taylor Lake scored 12 points in the first half to help NA construct its 12-point lead. However, Norwin’s persistence on the offensive glass allowed the Knights pull to within 26-23 late in the second quarter. Jenna Cole did the heavy lifting for Norwin by corralling seven rebounds, three offensively, and netting 10 points on 4 of 6 shooting from the field.

The Tigers led 28-23 coming out of halftime and brought the score to 39-23 with a 11-0 run to begin the third quarter. Senior Abby Gonzales spearheaded the third quarter effort and totaled 12 points for the game, knocking down a pair of 3-pointers.  The Tigers led by as much as 16 points and took a 41-28 lead into the fourth quarter.

Eerily similar to the WPIAL championship game, Norwin was again facing a 13-point deficit in the final period and began to chip away. Pitt recruit Alayna Gribble opened the fourth quarter with a 3-pointer and added another trey later in the period to cut the NA lead to 43-41 with about three minutes to play. Gribble totaled a game-high 21 points for the Knights.

While the top-ranked team in the state seemed destined for another come-from-behind win, this time the Tigers kept their poise and retaliated with a majestic 3-pointer from freshman Rachel Martindale with 2:06 remaining in the game for a 46-41 lead.

Norwin’s Taylor Sabol hit a pair of free throws with 1:51 to play to trim the score to 46-43, but the Knights would come no closer. With 44 seconds left, Martindale poured in two from the free-throw line to pull the score to 48-43 and Hailey Zeise put Norwin away for good with two more shots from the charity stripe to bring the final score to 50-43, Tigers. For her efforts in crunch time, Martindale was named the Wright Automotive Player of the Game.

North Allegheny improves to 25-4 overall, while Norwin’s season comes to a conclusion with a 27-1 record. The Tigers will take on District 3 champion Cumberland Valley in the PIAA semifinals on Tuesday night at a site and time to be determined. The game will be broadcast live via the internet on the North Allegheny Sports Network.