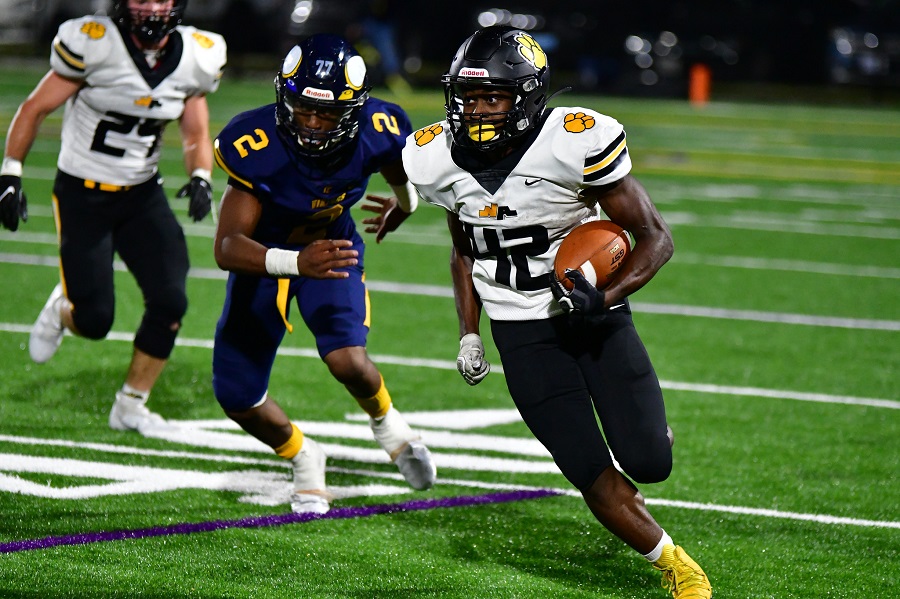 In a clash of Class 6A powers, the North Allegheny Tigers (3-1, 1-0) will host the Central Catholic Vikings (3-1, 1-0) tonight at Newman Stadium. The contest is a rematch of a last year’s WPIAL Class 6A title game, a contest won by the Vikings 38-24 at Martorelli Stadium.

Both teams enter tonight’s contest coming off blowout wins last week. The Tigers won their conference opener last Friday by rolling over the Baldwin Fighting Highlanders on the road, 61-14. Sophomore quarterback Logan Kushner earned Wright Automotive Player of the Game honors, completing 5-of-7 passes for 82 yards and three touchdowns. Two of his scoring strikes went to senior Kyrell Hutcherson, who finished with four catches for 72 yards. The Tigers outgained the Highlanders, 472-147.

In similar fashion, Central Catholic coasted to a 50-0 win over Norwin last week and has won three in a row since an opening day to loss to Imhotep Charter, 12-6. The Vikings average 38 points per game on offense and are directed by sophomore quarterback Peyton Wehner, who has thrown for 454 yards and five touchdowns, to go along with 45 yards rushing and three more scores. Wehner has a bevy of talented skill players to work with, including junior tailback Gannon Carothers, who has rushed for 414 yards and six scores. In the passing game, a pair of newcomers have helped bolster the receiving corps. Sophomore transfers Vernon Settles (Elizabeth Forward) and Peter Gonzalez (Mars) add depth and talent behind leading receiver and speedster, Brandon Jackson. Jackson and Carothers are also threats in the return game for Central Catholic.

The defense, a unit that permits 14 points per game, is anchored by defensive lineman Donovan Hinish. A first team all-conference pick in 2020, Hinish is ranked 33rd in the nation at defensive tackle by Rivals.com. Another first-team all-conference selection is back at linebacker in the form of J.D. Younger, who is second on the team in tackles with 20. Central Catholic’s leading tackler is sophomore linebacker Anthony Speca with 37 stops. Speca came on strong during his freshman campaign and earned Freshman All-American honors from Max Preps. In the secondary, senior Keith Cushenberry is the team leader in interceptions with two on the year.

Prior to last season’s championship game loss to Central Catholic, North Allegheny had won three in a row against the Vikings. The last time NA and PCC met at Newman Stadium was on Sept. 7, 2018, with the Tigers blowing out the Vikings, 27-3. Running back Ben Maenza led the offense with 111 yards rushing and two touchdowns. The NA defense forced Central Catholic into six turnovers, including interceptions by Joey Porter Jr. (Penn State) and Cory Melzer (Lehigh).

Kickoff for tonight’s game between North Allegheny and Central Catholic is slated for 7:30 p.m. The game will be broadcast live by the North Allegheny Sports Network broadcast crew of Randy Gore and Jonathan Spina, with the pregame show getting underway at 7:10 p.m. The pregame show will include an interview with Tigers head coach Art Walker. To listen to tonight’s game, click here.