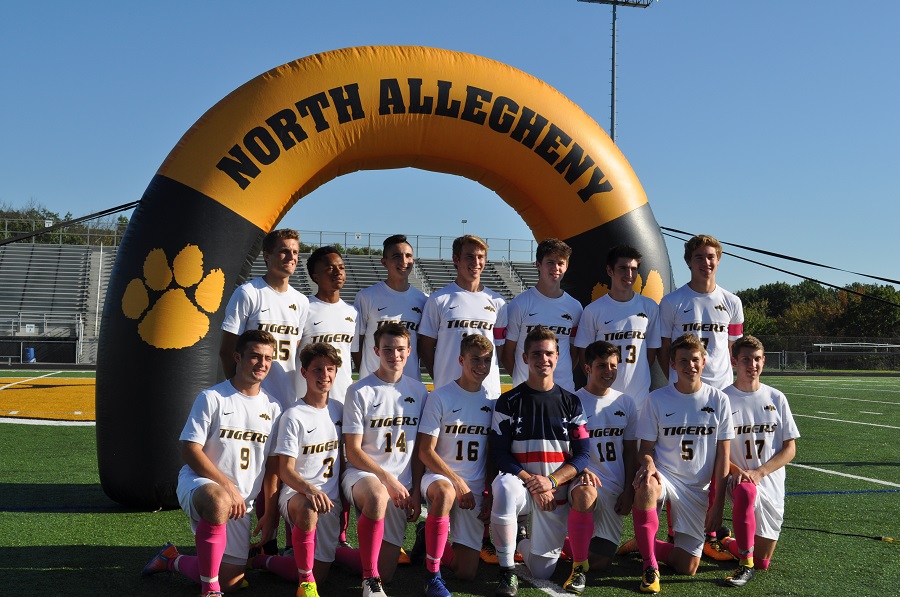 The Tigers opened the scoring at 33:17 when Williams scored off a corner-kick by Atwater, and it was just the beginning.  After two near misses by Luchini, Yurick made it 2-0 at 23:51 off an assist by Luchini.  Soon after that Atwater scored from 15-yards at 17:34 to add to the Tigers’ lead.  The Tigers had a few more chances in the first half, including a nice save by the Jaguar’s keeper on rocket-shot by Atwater from 20 yards out, and Ciocca just missing from in close at the 8:40 mark.  The Tigers ended-up out-shooting the Jaguars 10-1 in the first half and came away with a 3-0 lead.

The second-half was an impressive show of force as the Tigers scored seven goals.  It started at 32:58 with Yurick’s second goal of the game off an assist by Rouser.  Luchini then showed why he was recently selected as a high-school All-American by scoring two goals nine seconds apart: at 31:32 and again at 31:23 from 25 yards out.  Not to be outdone Yurick completed a hat trick at 27:05 off a nice assist from Marzula, making it 7-0.

Soon after that Coach Bobby Vosmaer subbed out the entire 11 senior players on the field who left to a standing ovation from the fans at Newman Stadium.  The new players showed that the future of NA soccer is bright as they proceeded to score 3 more goals: Jonny Ross at 15:33 off an assist from Nico Ramirez, Kyle Kaczmarek at 11:37 from a pass in front from Nikolaj Hindsbo, and Ross again at 8:00 off another assist from Ramirez, making the final score 10-0.

With the win the Tigers’ record improves to 14-2-1 and they have one regular-season game remaining on Monday vs. the Hampton Talbots at Newman Stadium at 7:30pm, with the WPIAL Playoffs to follow.

Thank you to all the fans, the NA Administration, and the many volunteers who made the NA Boys Soccer 2017 Senior Recognition Day a day to remember.