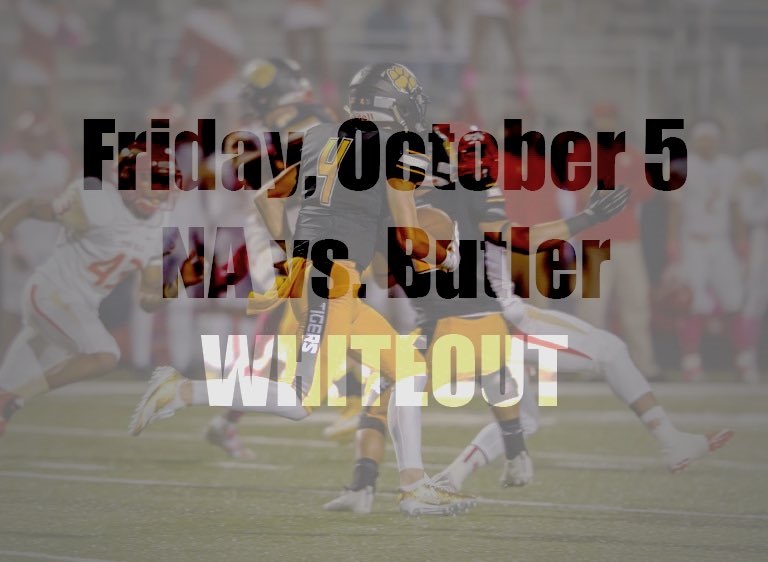 It’s homecoming and a “whiteout night” at Newman Stadium as the undefeated North Allegheny Tigers (6-0) play host to the winless Butler Golden Tornado (0-6) tonight. North Allegheny clinched a playoff berth with a 10-6 win over Seneca Valley last week and boasts a conference record of 5-0. Butler sits at 0-4 in conference play and is coming off a 42-0 loss at the hands of Norwin last Friday.

Butler last made the postseason in 2012 and has not had a winning season since 1997. A junior quarterback on the 1997 squad is now the new head coach of the Golden Tornado, Eric Christy. In his first-year as the head man at Butler, Christy is hoping to rebuild the Golden Tornado. Christy spent the last few seasons as the team’s offensive coordinator.

Despite a brand-new coach, the Golden Tornado have been stuck in neutral this season and have not scored a touchdown since week three. Not only has Butler been shutout for 12 consecutive quarters, the team has not thrown a touchdown pass in over three years. Butler’s offense averages seven points per game, while the defense permits 48 points per contest.

On the opposite end of the spectrum, North Allegheny’s offense averages 36 points per game and the NA defense permits only 11 points per contest. Offensively, the Tigers are led on the ground by senior tailback Ben Maenza with 659 yards and 11 touchdowns this season. In a defensive struggle last week, a sparkplug for the team was junior receiver Luke Colella, hauling in four passes for over 100 yards and also had a crucial 41-yard run in the second quarter to set up NA’s first score. Both of the Tigers’ scoring drives were set up by long plays from Colella.

Another key contributor to last week’s victory over Seneca Valley was punter Isaac West who dropped in three punts inside the 20-yard line. By keeping the field tilted in NA’s favor, West’s kicks allowed the Tigers defense to tee off on Seneca Valley. The Raiders scored a touchdown on their first drive of the game, only to never be heard from for the rest of the night. Senior linebacker Cade Hoke led the team in tackles last week and has a team-best 42 tackles on the season. Senior Joey Porter Jr. made a crucial interception in the fourth quarter and senior Corey Melzer intercepted his team-leading fourth pass of the campaign. For a player profile on Melzer, check out the video below.

Kickoff for tonight’s homecoming contest between North Allegheny and Butler is slated for 7:30 p.m. The game will be broadcast live via the internet by the North Allegheny Sports Network, with the pregame show getting underway at 7:10 p.m. To listen to tonight’s game, click here.