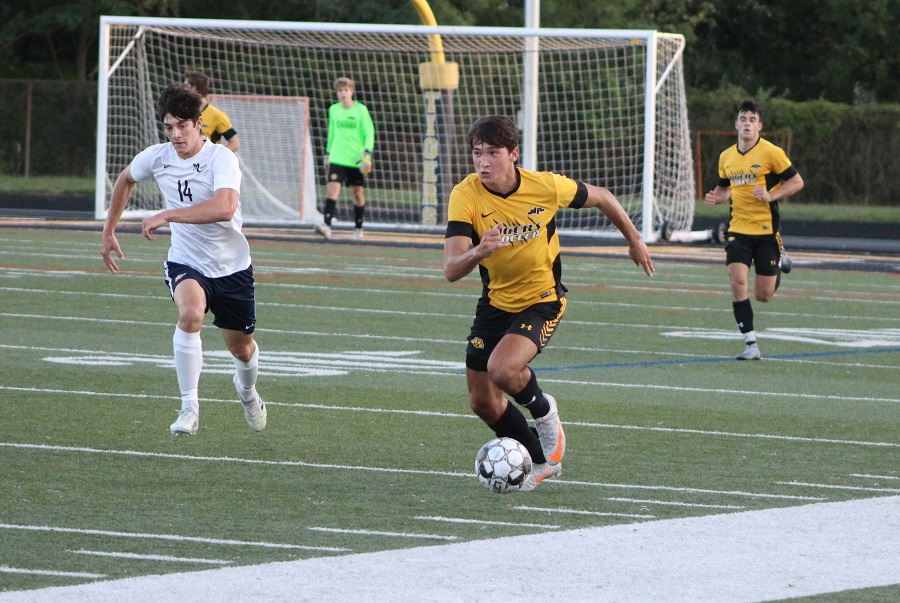 It was a game of saves in the first half, as starting senior goalkeepers Regan Racicot of NA and Clayton Humbert of Fox Chapel were solid in the first half. Seniors Phillip Iozzi and Kensly Owens both had good chances in the first frame. Junior Evan Anderson had Humbert beat with less than 10 minutes left in the half as well, but backspin on the ball stopped it from rolling into the net. There was no score after one half.

Fox Chapel looked to have the better chances at the start of the second half but North Allegheny quickly turned the tides. Senior netminder Mikkel Hindsbo took over in the second half and stayed strong in net, even with his vision impaired for a time by the setting sun to the west. With just over 15 minutes remaining in the game, Anderson would again get behind Humbert on a breakaway and he did not miss this time as the Tigers took a 1-0 lead. About six minutes later, Anderson split two defenders and fed a pass to senior Evan Cole, who buried it behind Humbert for a 2-0 lead. In garbage time, senior Sean Moore took advantage of a Fox Chapel turnover and went five-hole on Humbert to seal the win.

With the loss, Fox Chapel drops to 3-2 in both conference and overall play. The Foxes take on the Butler Golden Tornado at home Wednesday night.  The Foxes fall from first place in the section to fourth place.

North Allegheny improves to 4-1-1 overall and 3-1-1 in conference play. NA is now in a three-way tie for first place with Butler and Seneca Valley.

The Tigers will be back in action Monday night at Newman Stadium against the Pine Richland Rams, a game you can watch on the North Allegheny Sports Network at 7:30 pm.