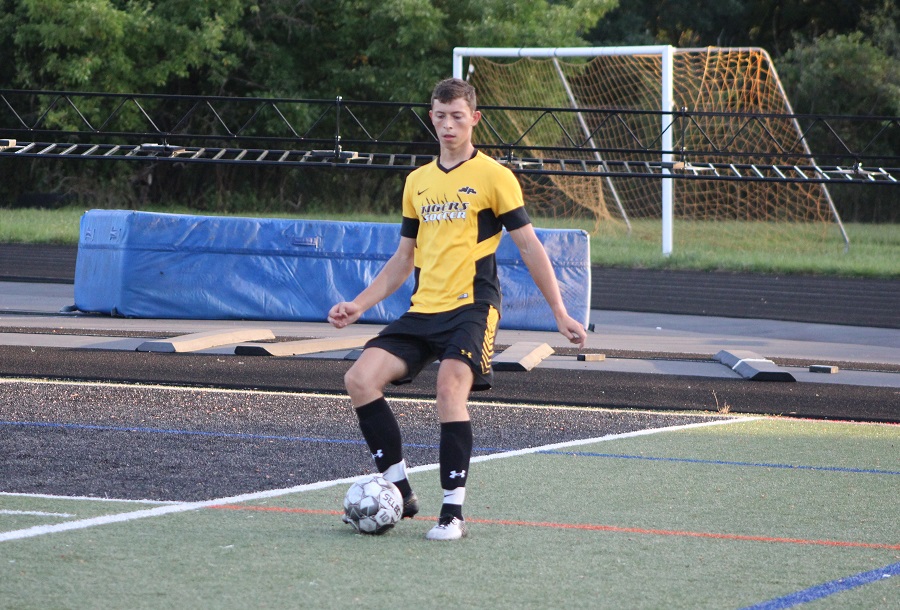 The first place North Allegheny Tigers traveled to Shaler last night to take on the Titans on Thursday night.  It was a hard-fought game with North Allegheny prevailing by a score of 4-2.

NA opened the scoring with 23 minutes to go in the half with Evan Anderson picking up a loose ball in the box and converting it into a goal for a 1-0 lead.  Four minutes later, NA extended the lead to 2-0 with a goal by Evan Cole.  With just over eight minutes left in the half, Shaler got on the board with a nice goal by Josh Jashinski to trim the NA lead to 2-1.  Shaler kept the pressure on a minute later on a free kick, but Mikkel Hindsbo made a nice save on the kick.  NA got some momentum back when Maanas Belambe made a nice run down the left wing and centered the ball but the shot by Kensly Owens went just wide right.  NA kept applying the pressure on the Shaler defense with Will Stasko dropping a pass to Brandon Marzula but his blast went wide left of the Shaler goal.  The half ended with NA getting the majority of the possession but only holding on to a narrow 2-1 lead.

NA came out aggressive in the second half with Owens creating a great chance on a nice run right up the middle of the field but the goalkeeper came out aggressively to thwart the attempt.  Stasko then created another opportunity for the Tigers with a nice cross from the right wing to Owens, but his shot was wide right of the goal.  With 29 minutes left in the half, Cole notched his second goal on the game on a pass from Stasko, to give the Tigers a little breathing room, leading 3-1.  NA continued to pile it on a minute later with another assist from Stasko.  This time the ball went to Sean Moore, who buried the pass for his fourth goal of the season and a 4-1 advantage. With 20 minutes left in the game, a North Allegheny foul in the box gave Ross Hartley a penalty kick and he converted for a Shaler goal, cutting the NA lead to 4-2.  The Tigers kept applying pressure on the Shaler defense in the remaining minutes, creating a lot of scoring opportunities, but the game ended with the Tigers winning by the score of 4-2

North Allegheny improves to 7-1-1 in Section 1-AAAA and 8-1-1 overall. Shaler falls to 3-7 overall and 2-7 in the section. The Tigers play next on Saturday afternoon at home in a non-conference game against Hampton.