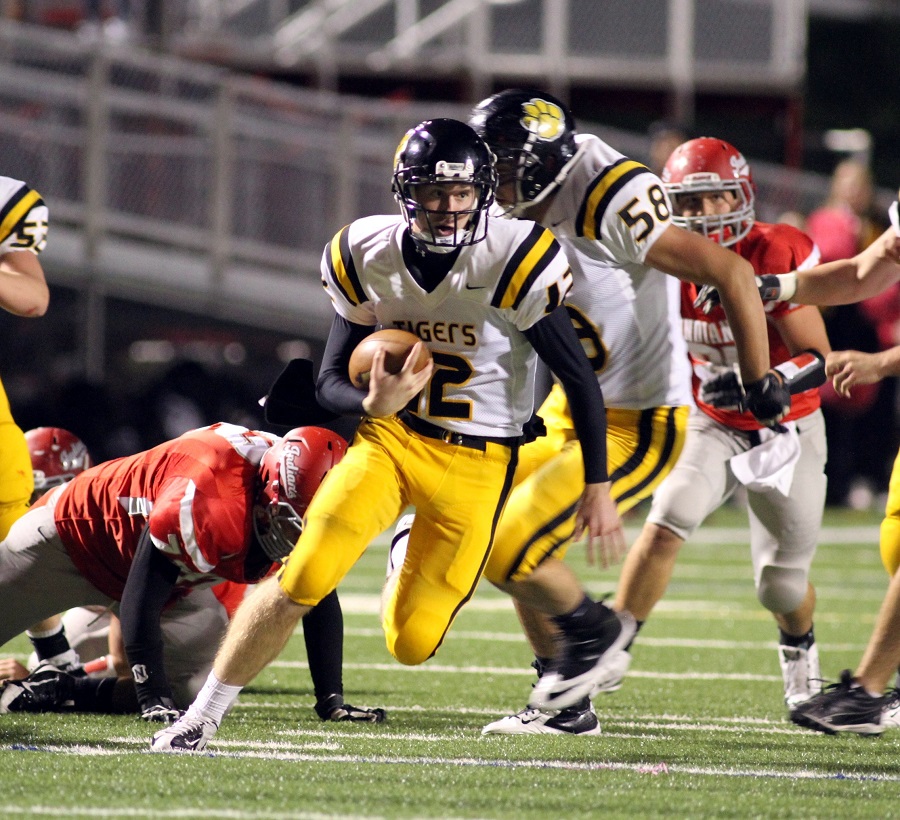 The North Allegheny defense forced five turnovers and allowed just 174 yards of total offense as the Tigers smothered the North Hills Indians on Friday night at Martorelli Stadium, 31-0.  Backup quarterback Cage Galupi stepped up in for starting QB Jeff Clemens, who was injured in the first series of the game, and completed 11 of 18 passes for 203 yards and two touchdowns.  For his efforts, Galupi was named the Wright Automotive Player of the Game.

The first big break of the contest came on North Hills second play from scrimmage as quarterback Kindahl Taylor fumbled the snap from center and NA linebacker Reilly Sullivan pounced on the football at the Indians 46-yard line.  Six plays later, the Tigers punched the ball in the end zone on an 8-yard touchdown pass by Galupi to running back Isaac Weaver for a 7-0 lead with 5:51 on the clock in the first quarter.

Along with the NA defense, the Tigers special teams and the punt returns of Clay Byerly were important to the win.  Late in the first quarter, Byerly returned an Eddie McDonough punt 36 yards to the North Hills 43-yard line to give the Tigers offense a short field.  North Allegheny capitalized by marching the football into the end zone on an eight play drive.  Indicative of a night where the bounces went the Tigers way, on a 2nd and goal from the NH 4-yard line, Weaver rushed to the 1-yard line where he took a hard hit and fumbled the football.  Fortunately for the Tigers, the ball bounced into the end zone where Sean Idowu recovered for a Tigers touchdown and a 14-0 lead with 10:39 to go before halftime.

On the ensuing kickoff, the Indians Brandon Wagner fumbled the football away to NA’s Tra Kiraly at the North Hills 19-yard line and again the Tigers would capitalize.  Two plays after the Wagner fumbled, junior Josh Bergman rumbled into the end zone on a 3-yard run to increase the North Allegheny lead to 21-0.

Midway through the third quarter, North Hills was mounting their best drive of the game, moving the football to the North Allegheny 11-yard line.  On a 1st and 10 play, Jon Sumpter sacked Taylor and jarred the ball loose, which was recovered by Sullivan at the NA 13-yard line.  Sullivan ended the night with two fumble recoveries and a team-high 6.5 tackles.

Seth Mancuso kicked a 32-yard field goal on the first play of the fourth quarter to balloon the North Allegheny lead to 24-0.  The Tigers put the final nail in the North Hills coffin with a 46-yard touchdown pass by Galupi to Elijah Zeise with 9:42 remaining to bring the final score to 31-0, Tigers.  Zeise finished with seven catches for 130 yards and one touchdown.

The win was the third straight by North Allegheny over their rivals, giving the Tigers the edge in the all-time series, 28-26.  Since losing at Martorelli stadium to the Indians in 2010, the Tigers have outscored the Indians 90-0 in the last three head-to-head meetings. Despite the emphatic win, North Allegheny will still have to play on the road in the First Round of the Class AAAA playoffs. As a result of the Gardner Points system which is used to break ties for the third place finishers in Quad-A, Gateway and Bethel Park will be the two third place teams hosting a playoff  game next Friday.

The Tigers triumph over their arch rivals improves their record to 6-3 overall and 5-2 in the Northern Eight Conference.  North Hills, who is also playoff bound, falls to 5-4 overall and 4-3 in conference play.  The WPIAL Class AAAA brackets will be announced on Monday night.  Wherever and whoever the Tigers play next Friday, the North Allegheny Sports Network will be there to broadcast all the live action.