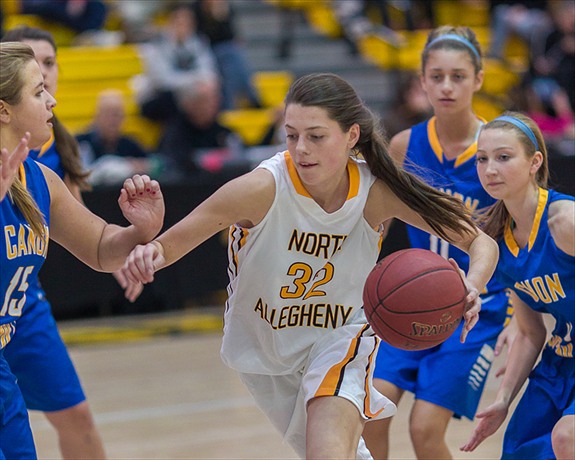 Junior Meg Morningstar scored 24 points, including six in overtime, to propel the North Allegheny Girls Basketball Team over Shaler, 66-57, in a key Section 3-AAAA contest on the road. Morningstar dominated the extra period and finished the night with a double-double, hauling in 13 rebounds. The Tigers dealt the Titans their first loss of the season.

In a hotly contested battle, the lead changed hands 20 times with neither team able to stretch out a lead to more than six points in regulation. Thanks in large part to junior forward Andi Lydon’s 23 point night, Shaler held a 50-46 lead with just 1:33 remaining in the game.  North Allegheny trimmed the deficit to one when junior Devvin LaBarge drained a three-pointer, one of five on the night, with 1:21 on the clock.  Shaler milked nearly a minute off the clock before Quinn Page was fouled and sent to the free-throw line.  Page connected on both attempts to raise the Shaler advantage to 52-49.  Morningstar answered with a layup with 16 seconds to play to cut the score to 52-51 before an NA foul put Lydon at the line. Lydon made one of two free-throws to bring the score to 53-51, Shaler, with seven seconds to go in regulation. North Allegheny sophomore Abby Gonzales came through with a clutch layup before the buzzer to send the game to overtime with the score even, 53-53.

Lydon began the extra session with a layup to put Shaler ahead, 55-53, but LaBarge responded with a trey that opened up a 13-2 run that lifted the Tigers to the 66-57 victory. Along with Morningstar’s double-double, LaBarge poured in 19 points and was 5 of 7 from beyond the arc. For Shaler, Carly Harris and Abbey Conrad netted double digits with 11 and 10 points, respectively.

The top-ranked Lady Tigers improve to 10-1 overall and 5-0 in Section 3.  Shaler drops to 9-1 overall and 3-1 in section play. North Allegheny hosts North Hills on Monday night in a game that can be heard live via the internet on the North Allegheny Sports Network.  Tip-off is slated for 7:30 pm.