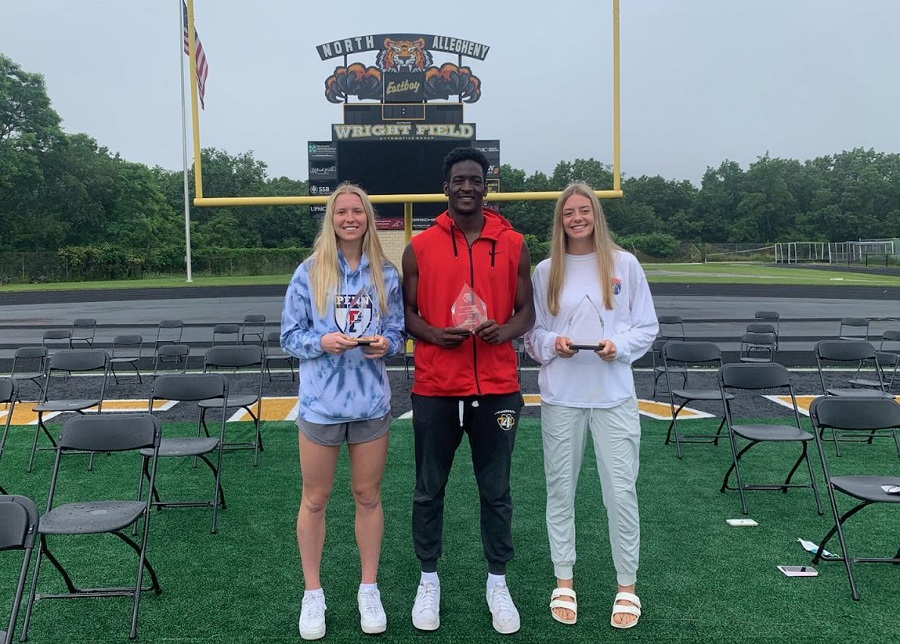 The North Allegheny Athletic Department is proud to announce its Athletes of the Year for the 2020-2021 school year. The Male Athlete of the Year is senior Khalil Dinkins and the Female Co-Athletes of the Year are seniors Lizzy Groetsch and Paige Morningstar. Below are capsules on each individual and their accomplishments.

Khalil Dinkins
A multi-sport athlete, Dinkins starred for North Allegheny on the gridiron and on the hardwood. Dinkins earned two all-state awards this past fall, selected as a First-Team All-State linebacker by Max Preps and by the Pennsylvania Sports Writers Association. The Penn State commit was also one of just 19 WPIAL players tabbed to play in the annual Big 33 Football Classic last month.

Among the many football accolades received this season, Dinkins was named first-team all-conference by the Big 56. He was also chosen for the Fabulous 22 Team by the Pittsburgh Post-Gazette and the Trib HSSN’s Terrific 25. Not done there, Dinkins earned first-team all-section laurels in basketball from the Big 56 and played in the annual Roundball Classic at Geneva College.

Lizzy Groetsch
A major contributor since her freshman season, Groetsch has been the driving force behind three WPIAL titles and one PIAA championship during her tenure with the North Allegheny girls’ basketball team. Groetsch, and fellow senior Paige Morningstar (more on her below), helped NA amass a record of 103-8 over the last four seasons.

Groetsch averaged 16.4 points, 7 rebounds, 4.3 assists and 2.2 steals this season. Groetsch finished her career with 1,504 career points. She capped her NA career with a game-high 22 points in the PIAA Class 6A championship game and led NA to a 55-40 victory over Spring Ford, concluding a spectacular 27-1 season for the Tigers. In May, Groetsch participated in the annual Roundball Classic and was named the MVP of the Class 6A vs. Class 5A contest.

Paige Morningstar
Another player who played her best when the lights shined the brightest was Morningstar. The starting forward on the North Allegheny girls’ basketball team, Morningstar was named third-team all-state by the Pennsylvania Sports Writers and earned second-team all-section laurels from the Big 56 Conference.

While Morningstar was dominant in the paint, where she made an even bigger splash was on the volleyball court as the Pennsylvania Gatorade Girls Volleyball Player of the Year. The University of Louisville commit led the North Allegheny girls’ volleyball team to four consecutive state championships, three WPIAL titles and a spectacular record of 88-1 during her tenure. As a senior, North Allegheny’s starting setter totaled 715 assists, while adding 97 digs, 91 kills, 41 blocks and 30 aces. She is three-time first-team all-state honoree and was named the Pittsburgh Post-Gazette Player of the Year.  This past fall, Morningstar facilitated the Tigers high-powered attack to the tune of an 18-0 record and a fourth straight PIAA title, beating Unionville 3-0 in the Class 4A state championship.

Congratulations to Dinkins, Groetsch and Morningstar for being selected as North Allegheny’s Athletes of the Year.