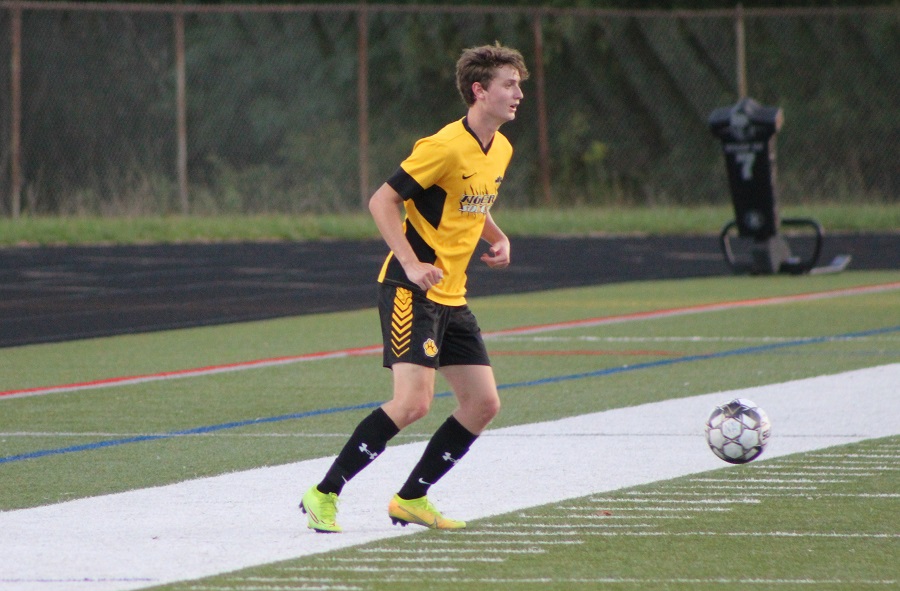 The North Allegheny boys’ soccer team earned a hard-fought section win on Monday night with a 1-0 triumph over the Pine-Richland Rams at Newman Stadium. Senior Alex Joy netted the only goal of the game with 31:32 to play in the second half to propel the Tigers to victory. For scoring the game-winning marker, Joy was named the Wright Automotive Player of the Game.

In the first 10 minutes of the contest, it appeared Pine-Richland might strike first with consistent pressure in the NA zone. A free kick from midfield by Cale Klaff gave PR it’s best opportunity in the opening flurry. The free kick by Klaff caromed off the head of an NA defender and slowly toward the Tigers’ net. However, a hustling and sliding kick save by forward Kensly Owens on the doorstep kept the game scoreless.

In the remaining minutes of the half, North Allegheny had several good scoring chances as well. At 19:04 left in the half, Owens let loose a shot from 10 yards out on the right wing that clanged off the left post. Just two minutes later, Will Stasko had an open shot from 25-yards out but narrowly missed high. With 3:50 remaining in the half, Evan Anderson sent a crossing pass from the right corner in front and a header attempt by Phillip Iozzi also came tantalizingly close but missed just high. Despite NA’s steady pressure, the score remained scoreless at intermission.

In the second half, the Tigers finally broke the deadlock on a transition rush up field. With crisp passing from Alok Shah in the midfield, to Owens and then Stasko down the right wing, led to a crossing pass by Stasko who found a wide-open Joy in front of the net. Joy cashed in by burying a shot from 10 yards out to give NA a 1-0 lead with 31:32 left in the second half.

Pine-Richland’s best chance to tie the game came with 25 minutes remaining but a diving stop by NA goalie Regan Racicot denied PR sophomore Colin Zvejnieks and the score stayed, 1-0, North Allegheny. From there, the Tigers controlled possession and held on for the one-goal victory.

The shutout is North Allegheny’s fifth on the season, one more than the Tigers had all of last season.

The win keeps North Allegheny a three-way tie for first place with a 4-1-1 record in Section 1-AAAA. The Tigers sit at 5-1-1 overall, while Pine-Richland drops to 2-3-1 in the section. The Tigers and Rams will not have to wait long for a rematch as the two teams meet again on Wednesday night in Gibsonia.