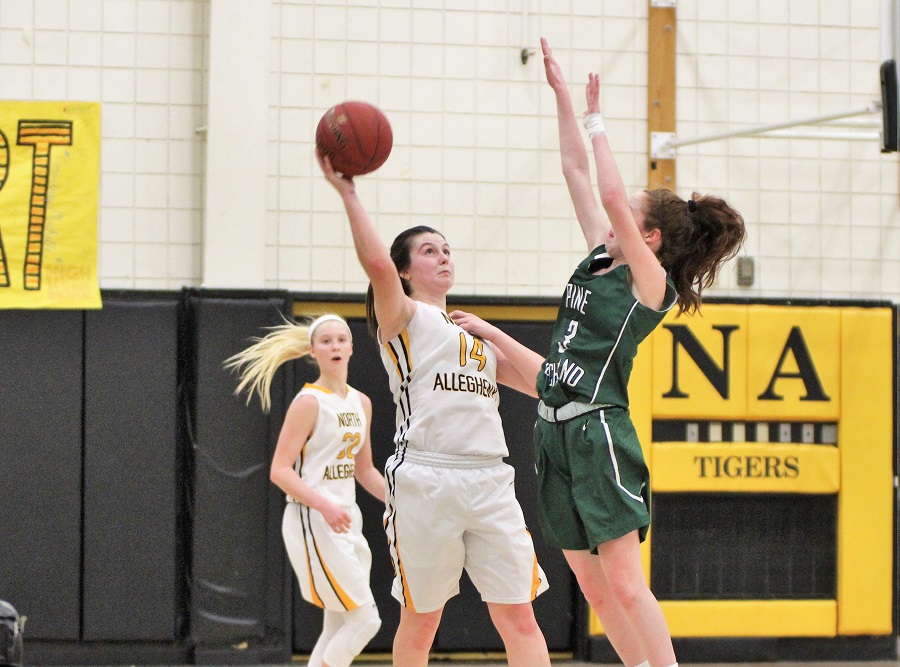 In a memorable senior night performance, the North Allegheny Tigers dismantled the Pine-Richland Rams for the second time this season with a 49-27 victory on Thursday night. The Tigers defense put the clamps down on the Rams, holding their section foe to a paltry 49 points in their two meetings combined. Senior Piper Morningstar reached double figures with 12 points and fellow senior Madelyn Fischer commanded the glass with seven rebounds and nine points offensively. Collectively, the North Allegheny seniors were named the Wright Automotive Players of the Game.

While the evening belonged to the seniors, the play of the night was made by junior Rachel Martindale who dazzled the crowd with an overhand half-court buzzer beater to end the third quarter. Martindale finished with a team-high 14 points and four steals.

Entering the night just a game behind the final playoff spot in Section 1-6A, the Rams used a deliberate offense and clean ballhandling to stay in the game. A 3-pointer by Meghan Luellen to end the first half, kept Pine-Richland within striking distance, trailing the Tigers 21-16 at intermission.

Despite the Rams best efforts, North Allegheny overwhelmed Pine-Richland in second half with an air-tight defense and a dominant night on the glass to capture its 15th consecutive win.

North Allegheny improves to 15-0 overall and 7-0 in Section 1-6A. Pine-Richland dips to 4-11 overall and 2-5 in section play. The Tigers will visit Bethel Park in a battle of top Class 6A teams on Saturday night at 8:00 p.m.