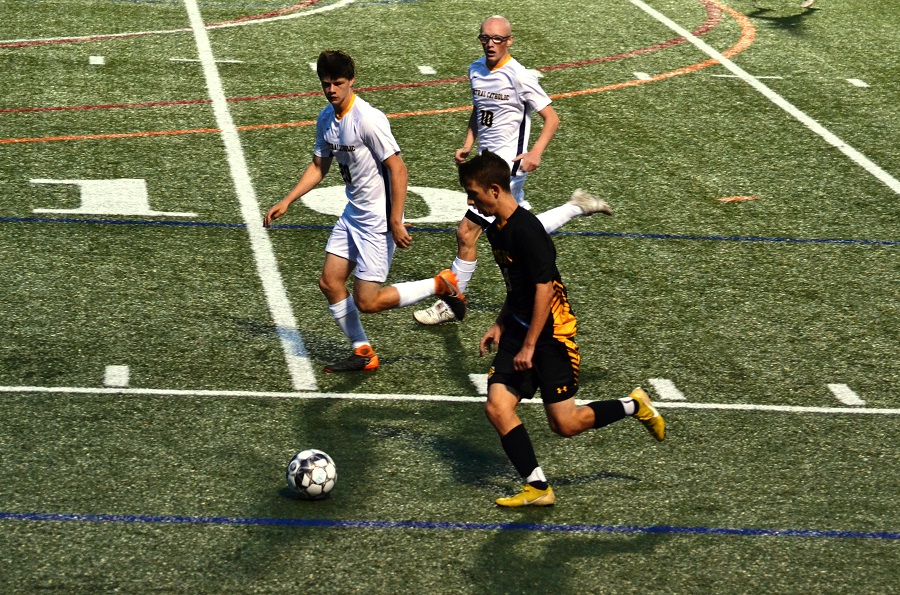 North Allegheny and Central Catholic met for the first time in almost eight years on Tuesday night and the host Tigers used a strong second half to prevail over the Vikings, 3-1, in Section 1-AAAA action. The last time these teams faced each other was in the opening round of the WPIAL playoffs in 2010 with Central Catholic winning in overtime, 1-0, on a goal by Brandon Peck.

Now members of the same section, Tuesday night’s game was the first of two matchups between the Tigers and Vikings this season. In the first half, it was Central Catholic who struck first as junior Marco Morgano scored with 20:36 on the clock for a 1-0 lead.

Following the Morgano goal, the Tigers dominated the rest of the half and produced quality scoring chances for Matt Van Kirk and Bryce Burroughs but neither could find the back of the net.

The Tigers continued to dictate the pace in the second half and maintained pressure in the Vikings’ zone. That persistence eventually paid off when senior Sam Wilson arched a corner kick in front of the net and junior Will Cinker scored on a header to tie the game at 1-1, with 16:17 to play in regulation.

The game remained deadlocked until the waning minutes of the contest. Junior Sam Maldia played a ball through to Jonathan Ross who put a strong shot on net that was saved by Central Catholic goalie A.J. Ewing. While Ewing made a sprawling save, he could not control the rebound and Cinker drove the ball home for a 2-1 lead with just 2:16 remaining in the game. With two goals on the night, Cinker was named the Wright Automotive Player of the Game.

Ross put the win on ice by tapping in a goal on the doorstep with just 43 seconds on the clock to close out a 3-1 victory. The Tigers outshot the Vikings, 9-2, and didn’t allow a shot on goal in the entire second half. NA led on corner kicks, 5-2.

With the win, North Allegheny stays undefeated with a 4-0 overall record and a 3-0 mark in Section 1-AAAA. Central Catholic slides to 1-3 overall and 0-3 in the section. The Tigers will face another section unbeaten on Thursday night with a visit to Butler to face the Golden Tornado. Kickoff is slated for 7:30 p.m.