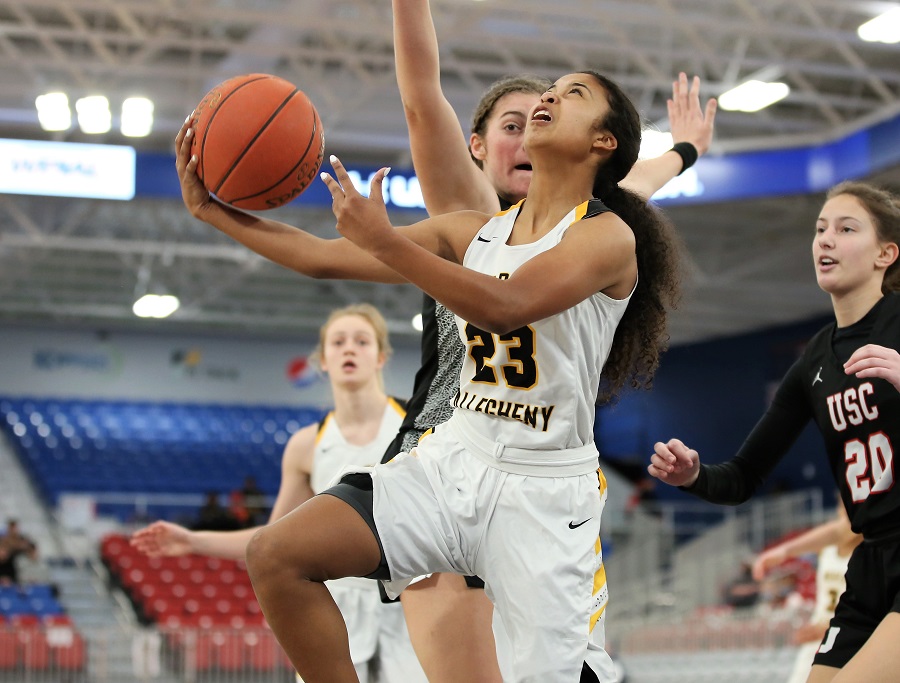 Comeback Not Enough As Panthers Edge Tigers In WPIAL Semifinal

The North Allegheny Tigers Girls Basketball team had faced and beat Upper St. Clair six times in the last five postseasons heading into yet another matchup Saturday afternoon at RMU’s UPMC Events Center. This time, it was the Panthers with the edge, topping the Tigers 48-44 in the WPIAL Semifinal.

North Allegheny started the game slowly on offense. The Tigers had multiple high-percentage shots in the first quarter, but the bounces did not go their way. USC juniors Mia Brown and Katelyn Robbins set the pace for the game, scoring 10 of the 12 points in the first frame for the Panthers. Upper St. Clair led 12-7 after one quarter.

The USC junior duo continued their dominant performances into the second quarter, but NA junior Jasmine Timmerson started to emerge as a scoring threat. The Panthers took a 29-18 lead at the half.

North Allegheny stormed out of the gate into the third quarter on the back of senior Taylor Rawls, who dropped nine points in the frame, aiding the Tiger comeback. The 11-point deficit was erased on a Timmerson 3-pointer at the buzzer to tie the game at 36 apiece with one quarter to go.

NA took their first lead of the game less than two minutes into the fourth, off a Timmerson field goal. USC kept the score close in the final minutes of the quarter, but junior Cam Phillips dropped a three pointer down by one to re-take the lead 43-41 with just about 90 seconds left. Unfortunately, the Tigers could not hold the lead, as Timmerson came over mid-court looking to hold for the final shot, but multiple USC defenders forced a jump ball giving the Panthers possession. Upper St. Clair freshman Rylee Kalocay nailed a three point shot with 35 seconds to go to tie the game at 44. NA had the ball taken away quickly, and Kalocay was fouled with less than three seconds left to hit a pair of free throws to secure the win for USC.

Taylor Rawls was named Wright Automotive Player of the Game, leading the Tigers with 15 points. Timmerson finished the game with 12 points. Katelyn Robbins, who led all scorers with 18 points, paced Upper St. Clair. Kalocay finished the contest with 11.

With a 21-3 overall record, North Allegheny’s season is not over. All WPIAL Quarterfinal teams will make an appearance in the PIAA Tournament the week of March 7.