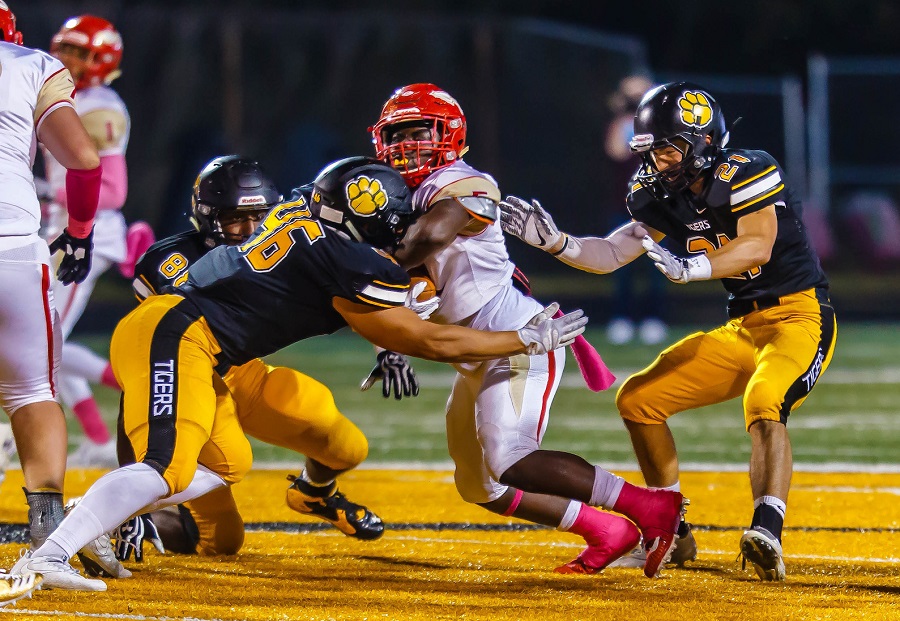 The North Allegheny defense intercepted four passes, including one pick six by junior defensive back Nikko Rankin, to spark a 38-14 triumph over the Mt. Lebanon Blue Devils in the WPIAL Class 6A quarterfinals on Friday night. The Tigers also posted five quarterback sacks to slow down the high-octane Mt. Lebanon offense. It was the second time this season NA beat Mt. Lebanon on the road.

North Allegheny’s offense got off to a quick start with a seven play, 40-yard drive that was capped on a 2-yard touchdown run by Turner White for an instant 7-0 lead. After a three-and-out by Mt. Lebanon, the Tigers improved the lead to 14-0 thanks to an 82-yard touchdown run by quarterback Luke Trueman with 6:38 to play in the first quarter.

The NA lead swelled to 21-0 with 8:41 remaining in the second quarter when Trueman hit fullback Ryan Langdon for a 10-yard touchdown pass. Langdon has two touchdown receptions this season with both coming against Mt. Lebanon.

Mt. Lebanon starting quarterback James Stocker was just 2 for 5 for 25 yards before leaving the game with an injury in the first half. Stuck in neutral most of the half, backup Seth Morgan ignited the Blue Devils offense late in the second quarter. Mt. Lebanon cut the score to 21-7 on a 6-yard touchdown run by Johnny Naylor with 2:43 left in the half.

Following a Tigers punt, the Blue Devils marched 96 yards on six plays for another score. With 24 seconds remaining before intermission, Morgan tossed a 22-yard touchdown pass to Lucas DeCaro to cut the NA advantage to 21-14. DeCaro also hauled in a 58-yard reception on the drive to set up the touchdown. DeCaro totaled five receptions for 111 yards. Receiving mate and record breaker Aidan Cain hauled in eight passes for 102 yards, but most of his damage was done with the game out of reach.

Down by just a touchdown, Mt. Lebanon opened the second half with the football but was forced to punt. With his second big kick return of the night, John Vardzel raced 50 yards with a punt to the Blue Devils 9-yard line. One play later, White toted the football the final nine yards for his second rushing score of the night and a 28-14 lead with 10:48 remaining in the third quarter.

Leading by two scores, the Tigers defense made a play that gave NA a decided advantage for the remainder of the contest. Sophomore Luke Colella tipped a Morgan pass that was intercepted by Rankin and returned 26-yards for a touchdown. The Rankin pick six was his second of the season and gave North Allegheny a 35-14 lead. Adding some crunching tackles on special teams, Rankin was selected as the Wright Automotive Player of the Game by the North Allegheny Sports Network.

Colella hauled in an interception of his own in the second half and junior defensive back Joey Porter Jr. picked off two passes to give him a team-leading seven on the season.

North Allegheny capped the scoring with a 23-yard field goal by Dom Falo late in the third quarter to bring the score to its eventual final, 38-14.

The Tigers improve to 8-3 on the season and advance to face the Pine-Richland Rams in the WPIAL semifinals next week. Mt. Lebanon’s season comes to a close with a 6-5 record.