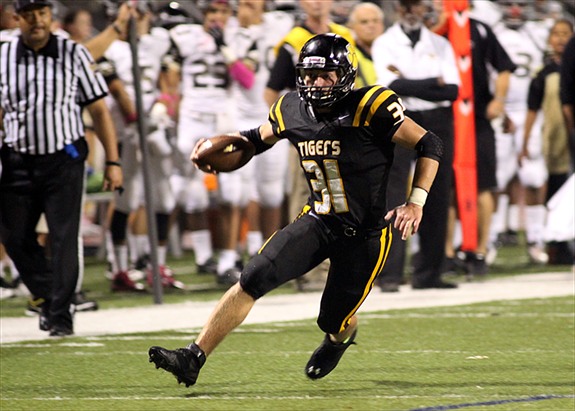 On a homecoming night that took many twists and turns along the way, the Gateway Gators spoiled the festivities at Newman Stadium by outlasting the North Allegheny Tigers, 35-32, in a non-conference game on Friday night. Gateway outgained the Tigers 485-289, but three fumbles and a botched punt, nearly allowed North Allegheny to pull out the victory.

Temple recruit Delvon Randall had a big night, accounting for 206 total yards and scored on a 56-yard rushing touchdown on Gateway’s first play from scrimmage to put the Gators ahead, 6-0.  The extra point kick failed.  Randall scored again with 1:38 to go in the first quarter on a 33-yard touchdown scamper to make it 13-0, Gateway. Both of Randall’s touchdowns came with the senior wideout lined up at the quarterback position.

Despite the early lead, Gateway coughed up two costly turnovers in the first half.  Thwarting a Gateway drive deep in Tigers territory, Layne Skundrich forced a first quarter fumble from quarterback Jimmy Moore that was recovered by Tra Kiraly at the NA 3-yard line.  After Isaac Weaver hauled in a 7-yard touchdown pass from Jeff Clemens on the first play of the second quarter to cut the score to 13-7, the Tigers defense stripped Randall of the football on the ensuing drive and Skundrich scooped up the loose ball and rumbled 50-yards for an NA touchdown and a 14-13 lead.

Gateway regained the lead with 5:57 to go in the second quarter when Moore hit Randall for a 32-yard touchdown strike to bring the score to 20-14, Gators.  North Allegheny responded with an eight play, 58-yard drive that culminated on a 1-yard QB sneak by Clemens to put the Tigers back on top, 21-20, with 2:50 on the second quarter clock.

The Gators stormed out of the gates in the second half with a pair of quick touchdown passes by Moore, a 47-yard strike to Anthony Davis and a 63-yard bomb to Montae Nicholson to give Gateway a 32-23 advantage.  Gateway had a chance to take a commanding lead with 5:35 remaining in the third quarter, but on a 3rd and goal from the NA 2-yard line, Zaihe Regus fumbled and the Tigers Zach Koegler recovered to keep NA’s hopes alive.

By early in the fourth quarter, North Allegheny began to rally. On a 4th and 16 from the Gateway 18-yard line, a bad snap on Gators a punt attempt led to a Tigers safety, cutting the score to 32-25.  Following the safety, North Allegheny drove the ball 42 yards in six plays, culminating the drive with a 22-yard field goal by Seth Mancuso to bring NA to within a touchdown at 32-26.

Gateway had appeared to put the contest out of reach when Jordan Washington booted a 21-yard field goal through the uprights to make it a two-score game again at 35-26 and the Tigers possessing no timeouts.  However, Weaver returned the ensuing kickoff 84-yards to the Gateway 10-yard line.  On the very next play, Clemens found Elijah Zeise for a 10-yard touchdown pass to make the score to 35-32, Gateway. The Tigers missed the extra point.  With North Allegheny needing an onside kick to continue the rally, Gateway dashed the Tigers hopes as Isaiah Davis fell on the football to finish off the Gators 35-32 win.

Despite the loss, there were some fine individual performances in the game. Isaac Weaver earned his second straight start at running back and rushed for 112 yards and caught a touchdown pass.  Weaver was named the Wright Automotive Player of the Game. Also contributing to the NA cause, Elijah Zeise pulled in five passes for 116 yards and a touchdown.  Jeff Clemens threw for 152 yards and two scores. For Gateway, Delvon Randall rushed for 115 yards and corralled five passes for 91 yards and a receiving score.

The loss was the first home defeat for the Tigers since a 23-14 loss to Upper St. Clair on September 18, 2009.  With the non-conference defeat, North Allegheny drops to 4-2 overall. Third-ranked Gateway remains undefeated at 6-0.  The Tigers visit top-ranked Central Catholic next week.