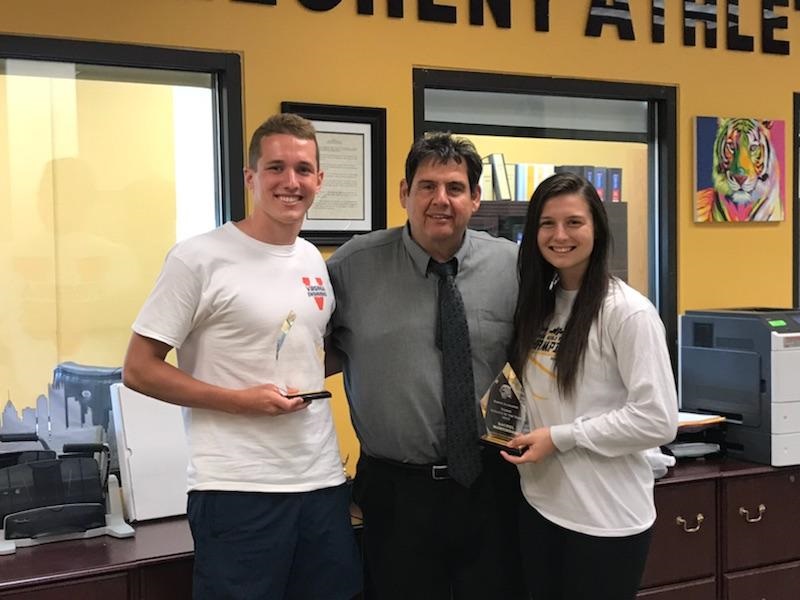 Wright helped the North Allegheny boys to three straight PIAA Class AAA swimming and diving championships and was a member of four consecutive WPIAL crowns. At states, Wright won gold in the 200-yard freestyle (1:35.04) for the second straight year and also claimed silver in the 100-freestyle (43.81). He also anchored the 200-freestyle relay team that won PIAA gold for the second consecutive season.

Wright was a member of a North Allegheny quartet that broke a pile of national high school and age group relay records, including most spectacularly at the 2018 PIAA State Meet. There they swam a 2:53.81 that was not only a National Public High School Record, but was also faster than Bolles’ legendary private school record. Additionally, Wright was tabbed with All-America honors from the National Interscholastic Swim Coaches Association. Wright will continue his swimming career at the University of Virginia.

On the hardwood, Martindale averaged 13.7 points and 5.2 rebounds per game this past winter. She totaled 1,373 points, 267 3-pointers, 270 assists and 205 steals in her North Allegheny career. The Tigers amassed a record of 105-11 during her four year-tenure. Among a bevy of accolades, Martindale was named all-state three times by the Pennsylvania Sports Writers along with back-to-back laurels on the Trib 10 and Post-Gazette’s Fab Five lists.

Due to a knee injury suffered in the 2018 WPIAL Class 6A girls’ basketball championship game, a contest the Tigers won, Martindale missed the rest of the state playoff run and the entire 2018 softball season. She showed no rust upon her return to the basketball court or the diamond. On the softball field, Martindale posted 101 career hits to go along with a career .470 batting average, 14 home runs, 70 RBI and 96 runs scored in just three seasons. She will continue her basketball career at the University of Akron next season.

Congratulations to both Jack Wright and Rachel Martindale for being name the 2018-2019 North Allegheny Athletes of the Year.

(Wright and Martindale in photo above with Athletic Director Bob Bozzuto. Partial credit to Swimswam.com for information on Jack Wright.)