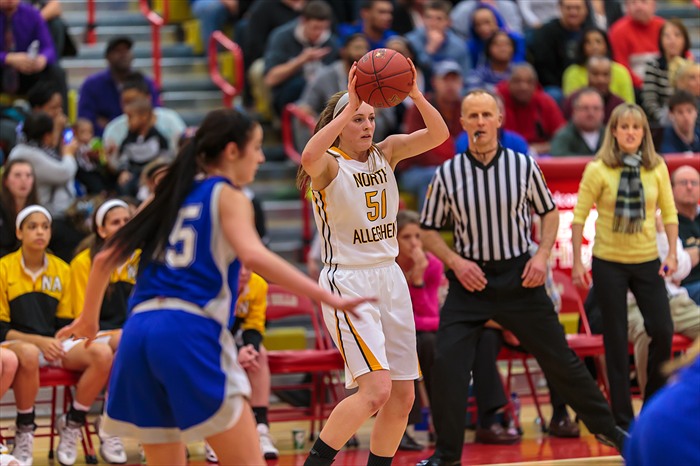 The North Allegheny Girls’ basketball team entered the WPIAL playoffs as the top seed and favorite to win the title.  The Section 3 champions finished the regular season 20-1 but came up short of their title hopes in the WPIAL semi-finals with a loss to the Hempfield Spartans by a score of 60-44. The Spartans would fall to Penn Trafford in the title game.  However, the Tigers season was not over and since the PIAA playoffs have begun it has been the Tigers who have played on and exacted revenge.  Last week they defeated the WPIAL champion Warriors of PT. This week they knocked off State College and tonight in true revenge style they ended the season for the Spartans of Hempfield who previously dashed their WPIAL title hopes.

The Tigers came out on the attack and did not let up for a moment forcing Hempfield to exhaustion and claiming a twenty six point victory by a final score of 73-47.  As the two teams felt each other out in the early going the Spartans took a 4-0 lead. Then the Tigers would claw right back and rattle off a 16-0 run. Danielle Wall scored 6 of her game high 20 points that would give them a lead they would not relinquish the rest of the evening.  Wall also had two rebounds and a steal on that first period run. The first period ended with a 5-0 run by Hempfield and the Tigers held a 16-9 lead.

While the Tigers did not give up the lead the Spartans did come charging back in the second period. Mo Burns scored 9 of the Spartans next 12 points and brought them within one at 22-21 at the midway point of the period but that would be as close as the Spartans would come.  The Tigers went on a 16-4 run to close out the half with a 38-25 lead and never looked back.  Joining Danielle Wall in double figures for the Tigers this evening was Taylor Lake with 17 and Taylor Brennan with 13.  Lake also provided 11 rebounds giving her a double double on the night and for her efforts she was named the Wright Automotive Player of the Game.  Abby Gonzales, Devvin LaBarge, Haley Zeise and Taylor Brennan provided a sound defensive attack that frustrated the Spartans. Hempfield had 2 players in double figures, Mo Burns with 18 and Leah Knizner with 10. The Spartans end their season with a record of 19-10.  The North Allegheny Tigers move on to the PIAA Semifinals with a record of 25-2. They are the final standing WPIAL Quad A girl’s team in the PIAA playoffs and will continue their run Tuesday, site and opponent to be announced.