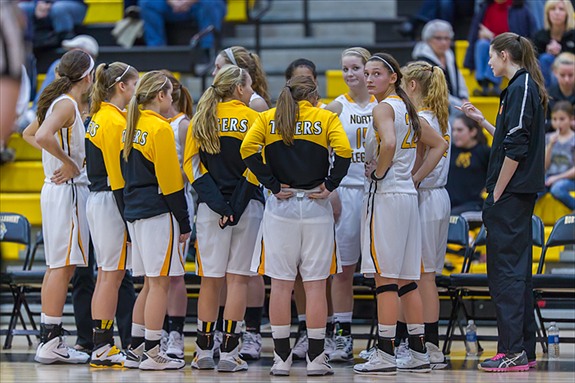 Lady Tigers Lock Up Section Title With Win Over Pine

North Allegheny won its 15th straight and locked up a Section 3-AAAA title by downing the Pine-Richland Rams for a 62-37 victory on Thursday night.  The Lady Tigers forced Pine-Richland into 17 turnovers and limited the Rams to just 13 field goal attempts in the first half.  Meanwhile, the NA shooters buried 11 of 21 shots for a 24-15 lead at intermission.  North Allegheny put the Rams away by outscoring their neighborhood rival, 22-6, in the third quarter.

The Tigers had four players finish in double figures with junior Devvin LaBarge leading the way with 15 points.  Junior Meg Morningstar picked apart Pine in the paint with 12 points on 6 of 9 shooting.  Taylor Lake also battled down low for 10 points and seven rebounds.  Sophomore Abby Gonzales scored 10 and dished out five assists.

For Pine-Richland, the Rams didn’t heat up until it was too late.  Amanda Kalin paced the Rams with 14 points, followed by Caitlyn Byerly’s 12 points, and Kaitlyn Jenkin’s 10. Kalin was 7 of 7 from the free-throw line.

North Allegheny advances its overall record to 16-1 overall and 10-0 in Section 3.  Pine-Richland, who is still fighting for a playoff spot and currently sits in fourth place, falls to 12-7 overall and 5-6 in the section.  The Lady Tigers hope to continue their winning ways with a home game against Shaler on Monday night.  The game will be broadcast live via the internet on the North Allegheny Sports Network.  Tip-off is scheduled for 7:30 pm.