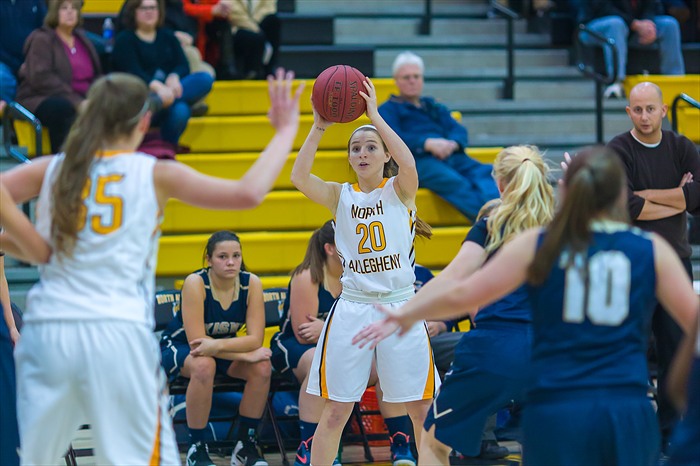 In an early-season battle of two teams expected to compete near the top of Section 3-AAAA, North Allegheny jumped in front early and pulled away late in a 62-42 home win over Shaler Friday evening. The Lady Tigers raced out to leads of 15-5 and 22-8 and eventually put the game away with a 13-0 run that spanned the third and fourth quarters.

With the victory, North Allegheny improved to 4-0 overall and 1-0 in Section 3. Shaler suffered its first loss of the young season, falling to 2-1 overall and 0-1 in section play.

The Lady Tigers were playing without one of their top offensive threats in senior guard Devvin LaBarge, who missed the game with an ankle injury. North Allegheny didn’t miss a beat, though, on that end of the floor, shooting 43 percent from the floor, 46.7 percent from beyond the arc.

Four Lady Tigers finished in double figures in scoring, including senior Karlee Helbling and juniors Taylor Lake and Abby Gonzales, who each tallied 11. Gonzales finished just short of a double-double with a team-high nine rebounds.

Grace Weiers rounded out the quartet in double figures with a team-best 13, including two treys. For her performance, the senior guard earned the honor of Wright Automotive Player of the Game.

North Allegheny is back in action Monday with its first road game of the season, a section contest at Pine-Richland. Tip-off is set for 7:30.