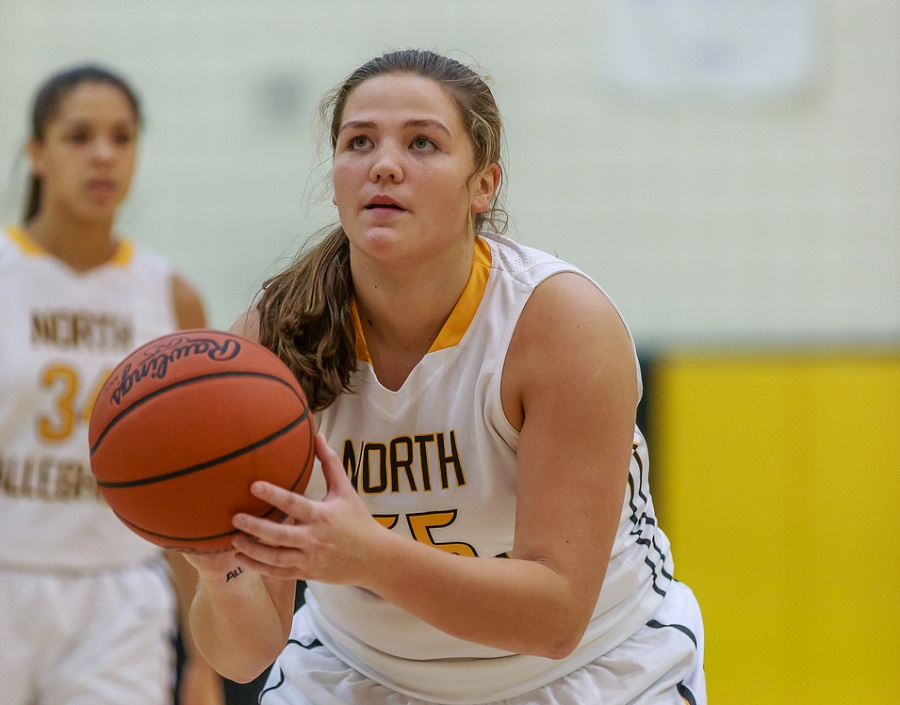 After a narrow win over Seneca Valley earlier in the week, the North Allegheny girls’ basketball team breezed by the Butler Golden Tornado on Thursday Night, 66-33, in Section 1-AAAAAA action. The win was North Allegheny’s ninth in a row and 14th straight win over Butler in the head-to-head series.

Facing a ninth-ranked Butler team with a chance to reach the playoffs for the first time in four years, the top-ranked Tigers hounded the Golden Tornado into 15 turnovers and dominated the glass. NA outrebounded the Tornado, 35-19, and grabbed 12 offensive boards. Junior Courtney Roman led the Tigers in rebounding with 10 and added eight points offensively.

Four Tigers posted double figures with sophomore Rachel Martindale netting a game-high 18 points. Martindale hit a 3-pointer to end the first half, giving North Allegheny a 27-18 lead at intermission. The Tigers blew the game wide open in the second half, outscoring the Tornado, 39-15, over the final two quarters. Junior Madelyn Fischer helped NA pull away by posting 14 points and eight rebounds and was named the Wright Automotive Player of the Game. Senior Hailey Zeise added 12 points and junior Piper Morningstar chipped in with 11 points, six assists and three steals.

Butler junior Jenna Kunst did her best to help the Tornado weather the NA storm with a team-high 15 points and poured in three 3-pointers. Junior Alyssa Eyth posted nine points for Butler but it wasn’t enough as the Tigers won in a blowout.

With the win, North Allegheny improves to 19-1 overall and 8-1 in section play. Butler dips to 10-8 overall and 3-6 in the section. Despite the loss, Butler still clinched a playoff berth because of other section results on Thursday night. The Tigers round out the section schedule on Monday with a visit to North Hills at 7:30 p.m.