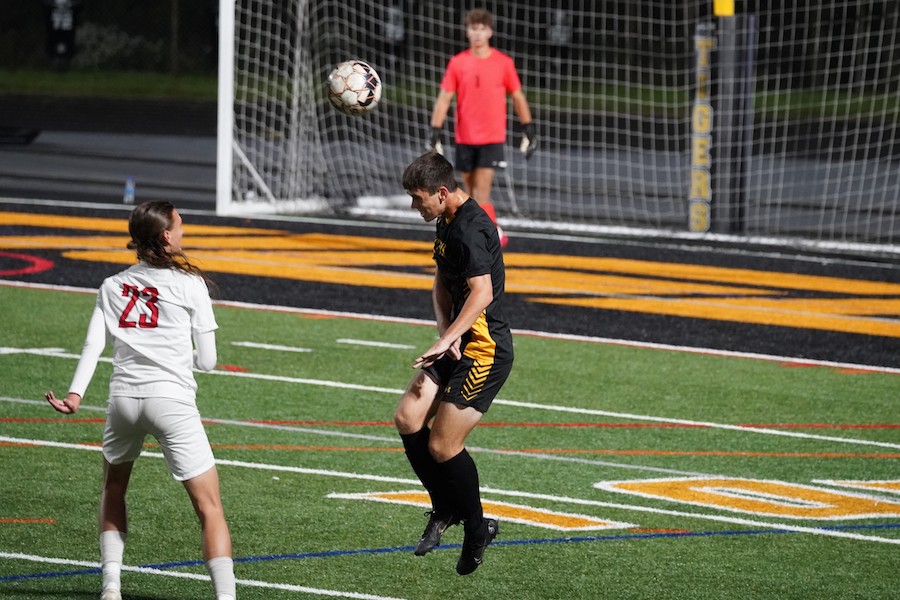 In a defensive battle between a pair of top-five ranked teams, the North Allegheny boys’ soccer team were edged by the Fox Chapel Foxes on Tuesday night at Newman Stadium, 1-0. Senior George Tabor netted the game-winning goal for the Foxes with just 16 seconds remaining in the game.

The fifth-ranked Tigers and second-ranked Foxes played to a scoreless stalemate for 79 minutes before the Tabor goal. In the first half, Fox Chapel had the best scoring chance with 8:47 on the clock but a Carson Krushansky header struck the crossbar and the game remained scoreless at the half.

With 29:42 remaining in the second half, North Allegheny senior captain Ben Christian struck a hard shot from about 30 yards out but his shot missed high. Fox Chapel clanged another shot off the crossbar with 18:00 left to play in regulation on a Colin Westerberg free kick from 50 yards out. Christian had NA’s best scoring chance on the night with 8:50 remaining with a hard shot on net but a save by Fox Chapel goalie Connor Scanlon kept the game tied, 0-0. Just two minutes, a drive from 35 yards out by John Brach sailed high with 6:11 left in the second half.

It appeared the contest was destined for overtime, but Tabor’s marker with just 16 seconds left propelled Fox Chapel to the win.

Despite the loss, the NA defense held down the Foxes for the vast majority of the game. For his efforts on the backline, senior defenseman Nathan Stalter was named the Wright Automotive Player of the Game.