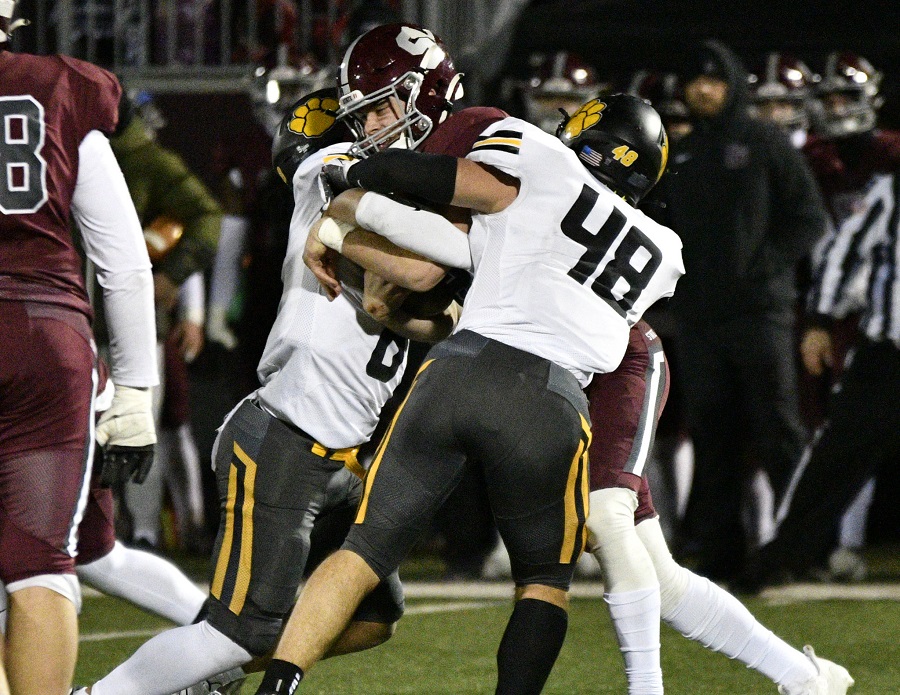 Appearing the in the state playoffs for the first time since 2012, the North Allegheny Tigers dropped a 28-7 decision to the State College Little Lions in the PIAA Class 6A quarterfinals on Friday night. State College remains undefeated on the season and will return to the PIAA final four for the second consecutive year.

On a cold a blustery night, the impact of a 20-mile per hour wind was felt early on the in the contest. With the wind at the back of State College in the first quarter, a 64-yard punt by Ian Brandt pinned North Allegheny at its own 2-yard line. Following a three-and-out, a North Allegheny punt into the wind gave State College possession in NA territory at the 27-yard line. One play later, junior quarterback Owen Yerka, tossed a 27-yard scoring strike to Michaul Gaul for a 7-0 lead with 5:49 to play in the first quarter. 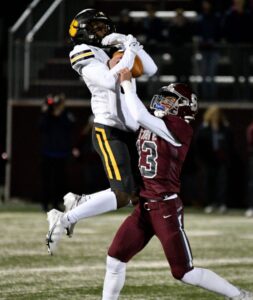 On North Allegheny’s ensuing possession, junior quarterback Logan Kushner heaved a 42-yard pass to Khiryn Boyd to set up the Tigers in State College territory. However, the drive stalled and NA settled for a 36-yard field goal attempt into the wind by Nick Van Winkle that fell just short of the crossbar, keeping the the Little Lions’ 7-0 lead intact.

In the second quarter, State College stretched its lead to 21-0 on a pair of rushing touchdowns by senior quarterback Finn Furmanek. The first scoring scamper came from 32 yards out with 9:11 to play in the half and Furmanek’s second touchdown run from 10 yards out gave the Lions a three touchdown lead with 6:20 on the clock. Furmanek rushed for a team-high 140 yards on 20 carries and freshman running back D’Ante Sheffey totaled 106 rushing yards on 16 carries.

In need of a score, the North Allegheny offense responded on the ensuing possession and put together a 76-yard march that culminated on a 3-yard touchdown run by Kushner with 2:13 remaining in the second quarter, cutting the State College lead to 21-7. The touchdown was Kushner’s eighth rushing score of the season.

The Little Lions’ final drive of the half ended on a Boyd interception with just 12 seconds left on the clock. The interception was Boyd’s team-leading seventh of the season. 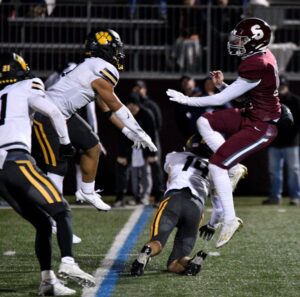 From there, the State College running game ran down the clock in the fourth quarter and capped the win on a 20-yard rushing touchdown by Yerka with 2:32 left to close out a 28-7 win.

Statistical leaders for North Allegheny included Kushner, who completed 16 of 36 passes for 175 yards. Boyd grabbed three receptions for 51 yards and running back Andrew Gavlik rushed for 57 yards on 16 carries.

The North Allegheny seniors were named the Wright Automotive Players of the Game for an outstanding 2022 season and four years with the Tigers.

North Allegheny’s season comes to an end with an 11-2 overall record. State College improves to 13-0 and advances to the PIAA semifinals next week. Congratulations to head coach Art Walker and entire Tiger team for a memorable season and WPIAL title winning campaign.