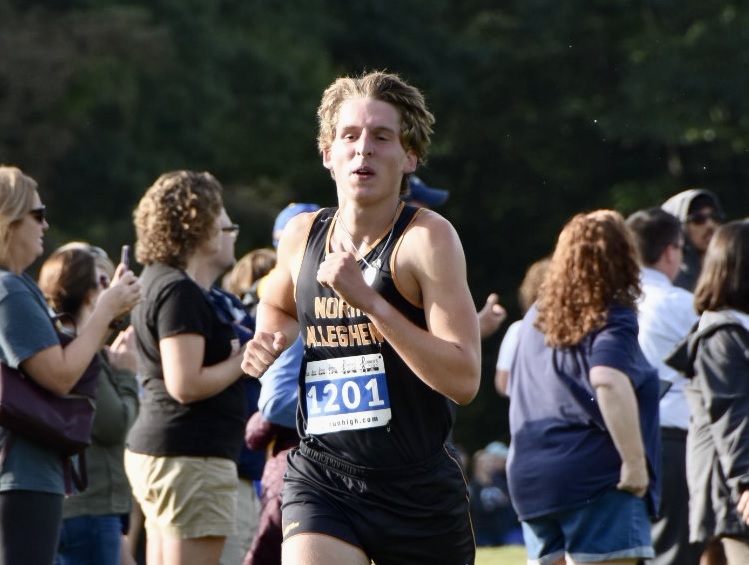 The North Allegheny cross country teams traveled to White Oak Park for the annual Red, White and Blue Invitational. It was a great day as many NA runners ran lifetime personal records.

The Class AAA girls’ race was first and the Tigers faced 32 opponents from the tri-state area. One of those teams was perennial powerhouse Morgantown. The reigning West Virginia state champs put the reigning Pennsylvania state champs to the test. Morgantown had a great start leading the Tigers with a 33-point lead at the one-mile mark. The Tigers clawed their way back into the race and closed the gap in the next mile to a seven-point deficit. That lead would stay for the final mile, as Morgantown captured gold with 57 points while the Tigers grabbed silver with 64 points. The next closest competitor had 204 points. The top seven girls were all under 20 minutes and were led by an outstanding performance from sophomore standout, Wren Kucler (2nd overall). The NA girls’ varsity results are below.

In the Class AAA boys’ race, the Tigers ran away with the title against the 31 large schools. They grabbed the lead early in the race and only added to their lead as the race progressed. By the end they had managed to put a 75-point gap between them and the second-place team. The Tigers had six runners in the top 20 and seven runners under 17 minutes. The Tigers were led by sophomore sensation Jack Bertram, who was second place overall. The NA boys’ varsity results:

Tigers race next against Mars Area on Tuesday at the home North Park course.