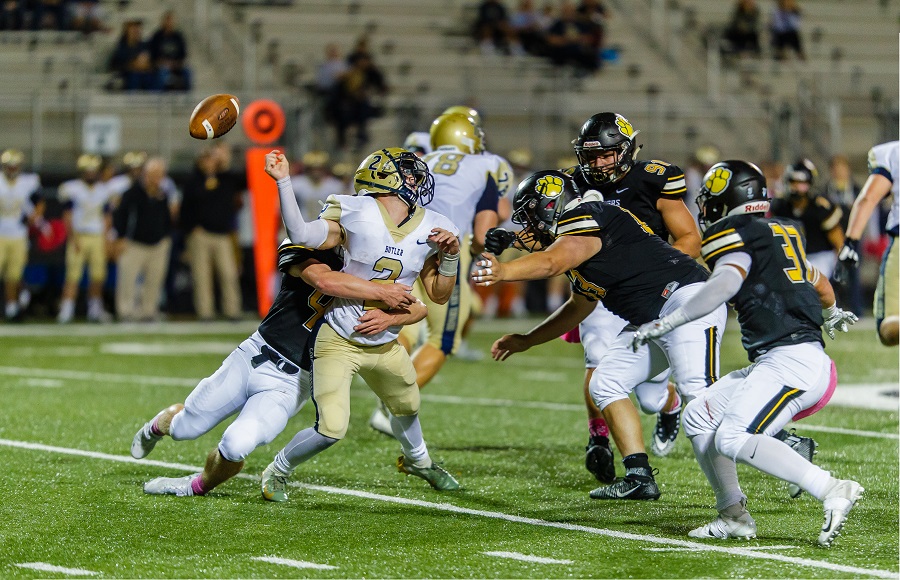 It was a pleasant homecoming night for North Allegheny as the Tigers bulldozed the Butler Golden Tornado, 55-3, at Newman Stadium on Friday. The victory was North Allegheny’s seventh in a row, while also extending Butler’s losing streak to seven straight.

The Tigers wasted little time in carving up the Tornado defense, scoring on the first play from scrimmage on a 53-yard touchdown pass from junior Ben Petchske to junior Percise Colon for an immediate 7-0 lead. On the ensuing possession, the NA defense took advantage of an errant shotgun snap that sailed over the head of Butler quarterback Kyler Callihan. Senior linebacker Dante Caputo scooped up the loose ball and rumbled 15 yards for a touchdown. The Tigers tacked on a two-point conversion run by Isaac West for a 15-0 lead with 10:57 remaining in the first quarter.

With 4:22 to play in the opening stanza, sophomore Khalil Dinkins hauled in a pass from Petschke and ran 80 yards to pay dirt for a 22-0 lead. For his efforts, Dinkins was named the Wright Automotive Player of the Game.

Butler snapped a scoreless streak of 13 consecutive quarters by converting on a 36-yard field goal from Ed Douthett with 9:42 to go in the second quarter to trim the NA advantage to 22-3. The Douthett field goal was the last time Butler would be heard from again.

Senior Ben Maenza, who entered the night as the second leading rusher in Class 6A, used his first two totes of the football to score two 25-yard touchdown runs to balloon the NA lead to 36-3. Junior Luke Colella added a 21-yard touchdown run and Colon scored again on a 2-yard run just before halftime to bring the score to 49-3, Tigers.

With the mercy rule clock in effect in the second half, the Tigers punctuated the night on an 8-yard touchdown run by Reid Fisher in the fourth quarter to round out a 55-3 triumph.

Following the win, North Allegheny improves to 7-0 overall and 6-0 in Class 6A. Butler dips to 0-7 overall and 0-5 in the conference. The Tigers will visit the Hempfield Spartans next week.