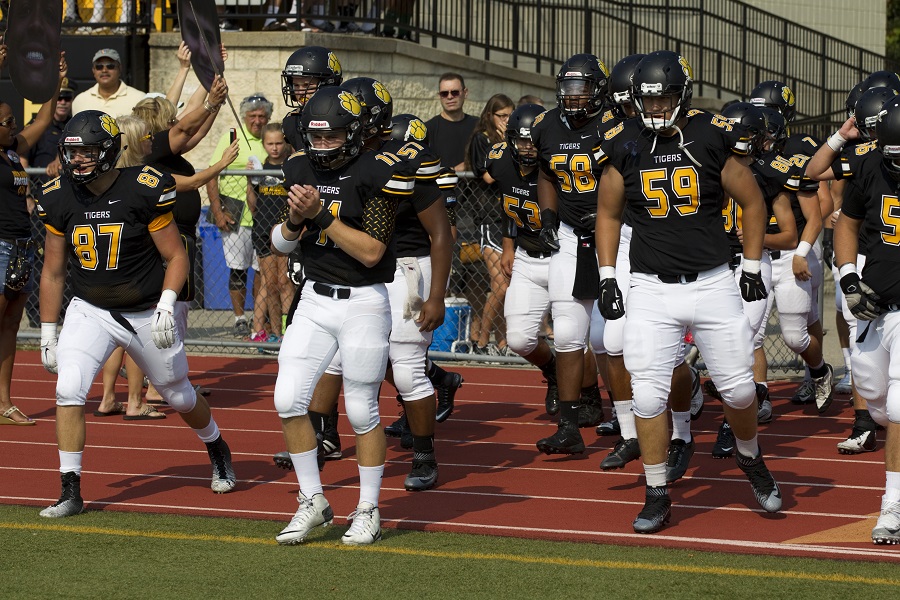 Week two of the high school football season pits the North Allegheny Tigers against the reigning WPIAL champion Pine-Richland Rams tonight. The Tigers and Rams last two meetings have been decided by a combined five points with Pine-Richland winning the most recent contest, a 28-24 overtime classic at Newman Stadium last season. Tonight’s Northern Eight Conference battle will be played on the road at Pine-Richland.

The defending champions return only four starters from last season and have the task of replacing 4,000 yard passer Ben DiNucci. Third-year head coach Eric Kasperowicz has entrusted his offense with sophomore quarterback Phil Jurkovec, a talented two-sport athlete who led the Pine-Richland basketball team in scoring as a freshman. Making his first start on the gridiron last week, Jurkovec passed for 142 and rushed for 105 yards in a 63-7 pummeling of the Shaler Titans. Senior running back Donald Bryant added 94 yards and four touchdowns on the ground as the Rams showed no signs of a championship hangover.

While there are a bevy of new faces in the lineup this season, there is a bookend pair of experienced lineman at the tackle position with James Willard and Matt Hampson. Another player with considerable experience is senior receiver Anthony Battaglia who caught 43 passes for 683 yards and seven touchdowns last season. Battaglia was the third leading receiver for the Rams a year ago and was also a Second Team All-Conference pick at defensive back.

Like Pine-Richland, North Allegheny is also coming off a season opening win although the Tigers had to work a bit harder for theirs. Against conference rival Seneca Valley, NA rallied from 14-points down for a 34-24 triumph. The Tigers overcame four turnovers and an injury to starting quarterback Riley Trueman for the win. Ethan Maenza led the Tigers offense in the fourth quarter and finished officially with 117 yards rushing and 41 yards passing. The junior tossed a touchdown pass and ran in a score for the black and gold. Maenza is likely to get the call as North Allegheny’s starter QB tonight as Trueman will be a game-time decision.

Despite Pine-Richland’s blowout win last week, the Rams did allow Shaler’s Jake Hartman 133 yards on the ground. With North Allegheny’s ability to run behind a physical offensive line, perhaps this will be an area the Tigers can exploit. Junior running back Michael Pope joined Maenza in surpassing the century mark last week, rushing for 106 yards and two touchdowns. Pope, along with Nick Provenzano, could be called upon for a heavy workload tonight.

The last time North Allegheny played at Pine-Richland the Tigers throttled the Rams by a 35-3 final on September 21, 2012. The last two meetings have been played at Newman Stadium with the Tigers winning 29-28 in 2013, but falling overtime last season.

Kickoff for tonight’s game is set for 7:30 pm with the pregame show on the North Allegheny Sports Network getting underway at 7:10 pm. The pregame show will include an interview with Tigers head coach Art Walker. Randy Gore and Rick Meister will have the call. Click here to listen to tonight’s broadcast.