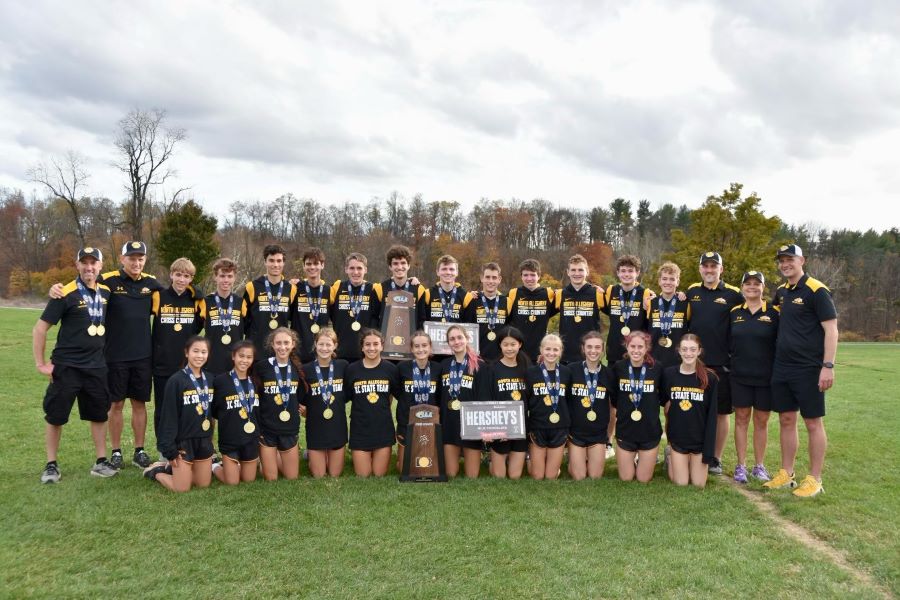 For the fifth year in a row, the NAXC girls won the state title. The NA girls did not waste time getting into a good position in the race, taking a 26-point lead by the end of the first mile. By the halfway point (near the highest elevation of the on the course), they had already increased their lead to 52 points on the nearest competitor.  The Tigers increased that lead in the second half, winning with 60 points versus the second-place team who scored 118 points. Leading the way for the girls, while having her best race as a Tiger, was sophomore sensation Wren Kucler, placing third overall. Next in for the champs, was junior leader Eva Kynaston with a ninth-place finish. Kynaston got out well and consistently passed people throughout the whole race.  Junior Erin McGoey was third for NA, with an outstanding medal-earning 23rd place. McGoey got boxed in early in the race, but she remained calm and poised and passed well over 30 people on the two aloha hills between 1.4K and 2.5K.  Lone senior on the girls’ state team, Grace Rowley was only one second and one place behind McGoey in 24th overall. Rowley has been a rock all season and came through again with an outstanding race when it mattered the most.  The top four girls were all on the medal stand – a feat very few teams in PIAA 3A history have accomplished. And not too far behind grace was sophomore Robin Kucler, who was so mentally strong in the last mile, grabbing an impressive 29th overall finish. Finishing sixth for the Tigers, was sophomore Camille Swirsding with a strong 85th place finish.  Sophomore Kendall Lucas was seventh for NA and 101st overall. Both Lucas and Swirsding helped displace many teams’ top five scorers.

For the third year in a row and fourth in the last five years, NAXC boys won state gold. The race was a very physical one, with many racers jostling for good position in the first have of the race. At the one-mile mark of the 5k course, NA was in sixth place. In the next 900 meters, the Tigers made some big moves and went from sixth to leading all teams by a 12-point margin. They continued their momentum, passing many runners in the second half of the race to earn an incredible margin of victory. The Tigers scored a low 85-point total compared to 161 points for the runner-up. This is one of the largest margins of victory in recent history.  Paving the way for the dominant victory was none other than sophomore Jack Bertram, who placed third behind two outstanding individuals. Finishing up a fantastic senior season campaign was Gregory Kossuth and Jackson Pajak.Kossuth was very strong for the champs (as he has been all season), grabbing a 20th place medal. Pajak had a great day moving up steadily throughout the race and grabbing the last individual medal (25th overall). Next in for the Tigers was junior James Behrend who placed 42nd overall with an outstanding performance. Following close behind Behrend, was senior Joey Rempe, who saved his best race for last. Rempe ran an incredible race, placing 45th to round out the top five and seal the win. Placing sixth for NA was Michael Gauntner, who displaced the top five runners from every team in the race, with his 82nd place finish.  Wrapping up the Tiger scoring was senior Nick Betler who was one of the most improved runners with a standout senior season.

Complete girl results can be found at https://runhigh.com/2022RESULTS/R110522AF.html

Complete boy results can be found at https://runhigh.com/2022RESULTS/R110522AG.html