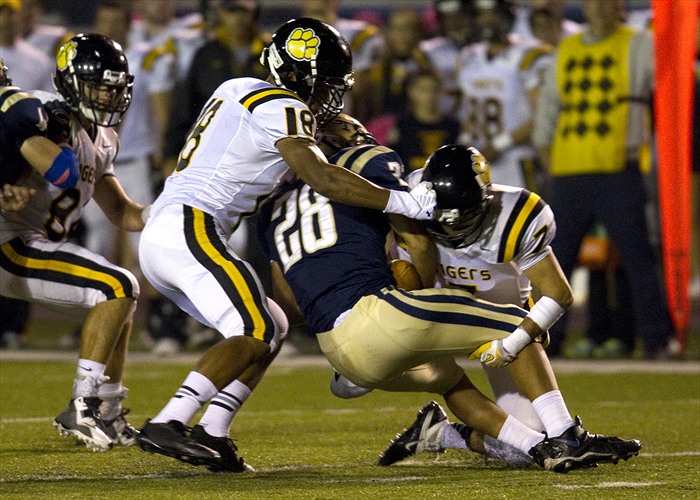 The North Allegheny defense forced three turnovers and held Butler to 143 yards of total offense as the Tigers shutout the Golden Tornado, 21-0, in a Northern Eight Conference tilt from Art Bernardi Stadium on Friday night. The game was a defensive struggle between the two teams, but NA’s defense proved to be the most opportunistic by forcing Butler into three second half turnovers, including a fourth quarter interception return for a touchdown by Ijhad Bonner that put the game on ice.

The Tigers began the game with the football from their own 20-yard line and marched the to the Butler 14-yard line before the drive stalled. North Allegheny settled on a field goal try by Seth Mancuso but the 31-yard kick sailed wide right and the game stayed scoreless despite a lengthy Tigers possession.

Butler’s first possession lasted only three plays and the homestanding Tornado punted the ball to NA sophomore Michael Pope who returned it 65-yards for a touchdown and a 7-0 Tigers lead. The rest of the first half was played in a defensive stalemate with the only score of the half being Pope’s punt return touchdown.

In the second half, the Golden Tornado opened with the football but on a 3rd and 8, Tigers linebacker Layne Skundrich forced and recovered a fumble by Butler quarterback Jamison Smith at the Golden Tornado 25-yard line.  North Allegheny capitalized on the turnover and scored five plays later on a 26-yard touchdown pass by Jeff Clemens to Matt Sell to bring the score to 14-0, Tigers, with 8:59 remaining in the third quarter.

Butler’s second possession of the half ended on an interception by Riley Trueman at the NA 29-yard line, and the Golden Tornado’s third and final fopaux of the night came when Smith threw an interception to Bonner that was returned 42 yards for a touchdown and a 21-0 lead with 9:28 left in the game. Bonner finished with six tackles and the game clinching interception.  For his efforts, Ijhad Bonner was named the Wright Automotive Player of the Game in a contest where the Tigers defense ruled the day.

The victory over Butler was NA’s 11th straight over the Golden Tornado since 2003 and the third consecutive after beginning the season 1-2. The Tigers improve to 4-2 overall and 3-2 in the Quad North.  Butler falls to 2-4 overall and 1-3 in conference play.