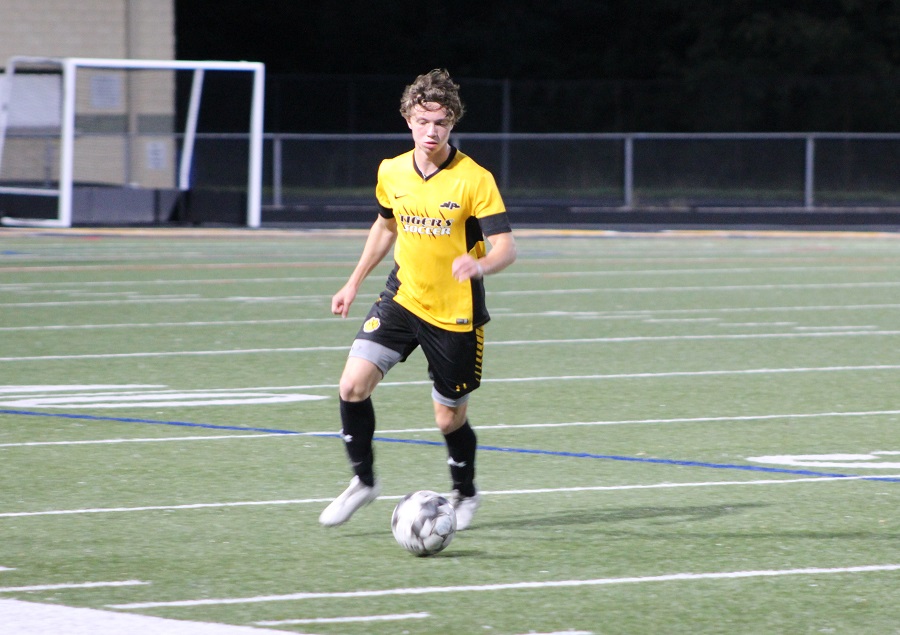 North Allegheny traveled to Fox Chapel on Monday night to take on the Foxes for their second matchup of the season.  NA won at home by a 3-0 score.  With second place in the conference on the line, the Tigers were looking to sweep the season series.

The first opportunity for either side came six minutes in when the Foxes made a nice run down the right side and centered, but their shot went wide left of the goal.  NA got their first offensive opportunity twelve minutes in with great team passing, that lead to a Jonathan Swann cross that was just out of the reach of a streaking NA forward.  Then, with nineteen minutes left in the half, William Stasko centered a ball to Evan Anderson, who got a shot on goal but it was saved by Fox Chapel. The next scoring opportunity came from Fox Chapel, diving save by Mikkel Hindsbo kept the game scoreless.  Hindsbo made two more great saves with just over a minute left in the half.  Then, with fifteen seconds left in the half, a foul was called on NA in the goal box.  Fox Chapel converted on the penalty kick and the half ended with Fox Chapel leading 1-0.

The second half started strong for NA.  Four minutes into the half, Brandon Marzula played a long ball that Stasko ran down.  With the Fox Chapel goalkeeper closing on the ball, Stasko was able to get a pass across to an open Anderson, who easily converted the game tying goal.

Fox Chapel fought right back to try to get the equalizer, but a shot by a Fox Chapel forward hit the left upright, so the game remained tied 1-1.  Fox Chapel was then awarded a free kick that was put on goal, but a nice punch out by Reagan Racicot thwarted the attempt.  He also made a great save on a corner with eighteen minutes left.   The North Allegheny defense of Max Kress, Jacob Gardner, Swann and Owen Smith were playing tough and not allowing Fox Chapel to take the lead.  But, with the ball bouncing Fox Chapel’s way, NA couldn’t get the momentum back. With just under eleven minutes left in the game, Fox Chapel was awarded a free kick that lead to their second goal.  The game ended with Fox Chapel defeating the Tigers by a score of 2-1.

North Allegheny falls to 11-3-1 overall and completes the Section 1-AAAA schedule with an 8-3-1 record. The Tigers next play on Wednesday night against Taylor Allderdice in the regular season finale.