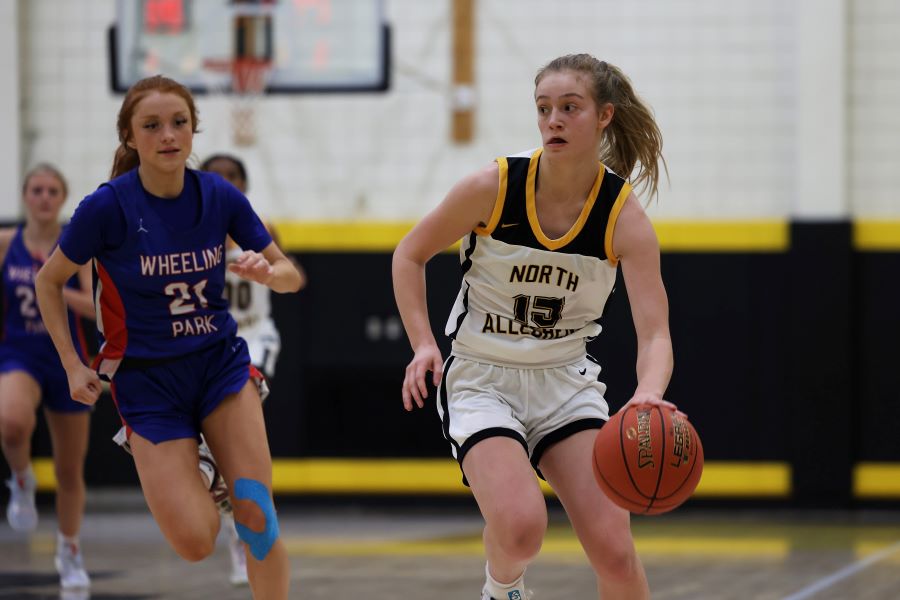 In a clash of titans between teams from the Keystone State and Mountain State, the North Allegheny Tigers were edged by the Wheeling Park Patriots on Thursday Night by a 55-54 decision.

The game was hotly contested throughout the night and featured eight ties and seven lead changes. Following a back-and-forth first half, North Allegheny held a 30-29 lead at intermission. Senior Jasmine Timmerson paced the team with 14 points in the first half and 19 points overall. For her efforts, Timmerson was named the Wright Automotive Player of the Game.

In the third quarter, North Allegheny used a 14-3 run to take a 44-34 lead. The run included back-to-back 3-pointers by juniors Kellie McConnell and Grace Heliger, and a driving layup by senior Cam Phillips capped the run with 50 seconds left in the period. However, Wheeling Park ended the third on a 5-1 run sparked on layup and 3-pointer by junior Natalie Daugherty to cut the NA lead to 45-39.

Suddenly finding the hot hand from beyond the arc, Daugherty stroked another 3-pointer to open the fourth quarter to trim the score to 45-42, Tigers. Wheeling Park sophomore Alexis Bordas followed suit with a 3-pointer from the left wing to tie the score at 45-45 with 6:23 left in the fourth quarter. Junior Lydia Betz, who finished with 10 points, immediately answered to give NA the lead back, 47-45, with six minutes left in the game.

Bordas knotted the score with a baseline jumper and vaulted Wheeling Park ahead, 50-47, with another 3-pointer just under four minutes remaining in the contest. While the Tigers threatened, the Patriots didn’t trail again rest of the way. Neither team shot well from the free-throw line, but Wheeling Park did just enough to hang on for a 55-54 non-section win. The Tigers were 10-of-18 from the charity stripe and the Patriots connected on only 5-of-13 tries from the free-throw line.

With the loss, North Allegheny slips to 2-1 on the season. Wheeling Park improves to 2-0 overall. The Tigers look to bounce back on Thursday, Dec. 15 with a non-section home game against the McDowell Trojans at 7:00 p.m. The game will be broadcast from live by the North Allegheny Sports Network.