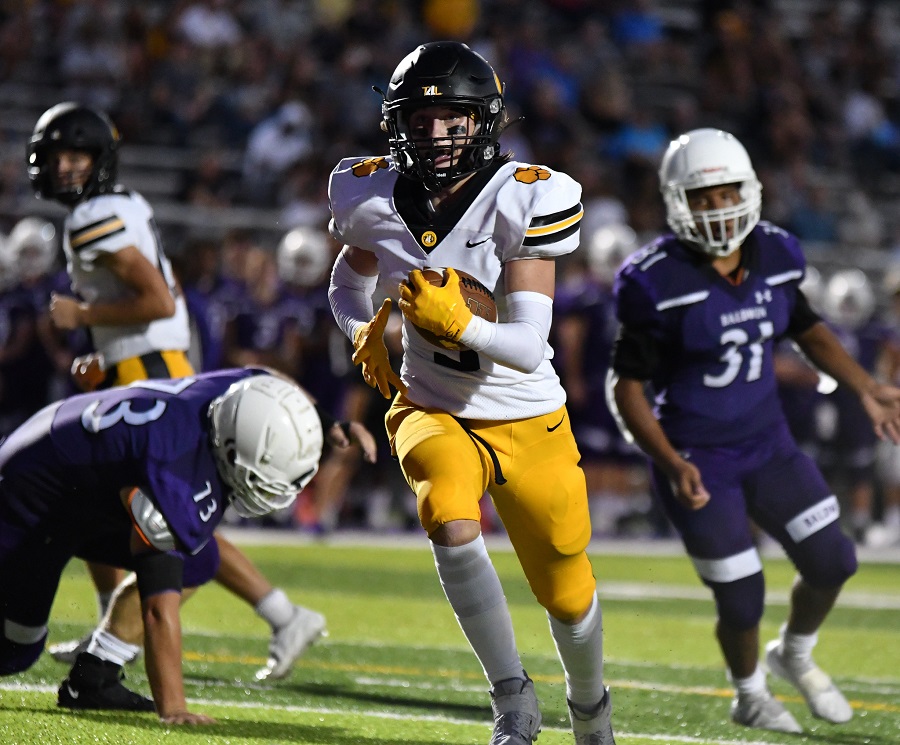 The undefeated North Allegheny Tigers (3-0) plays host to the Baldwin Fighting Highlanders (1-2) tonight at Newman Stadium in an interconference clash between Class 6A and 5A teams.

The Tigers are off to a perfect start through three games and are coming off a thrilling come-from-behind win over District 10 power, McDowell, last week by a 29-18 decision. Trailing 18-7 late in the third quarter, the Tigers scored 22 unanswered points to claim the win. The comeback was sparked by junior quarterback Logan Kushner, who threw for 204 yards, three touchdowns and ran for another score. Junior wideout Khiryn Boyd hauled in 5 passes for 133 yards and two touchdowns, including a 74-yard touchdown in the fourth quarter that proved to be the game-winning score. The defense forced two turnovers and provided the game’s crucial play with a sack and forced fumble by Ian Zahorchak that led to the Boyd long touchdown on the very next play.

Tonight, North Allegheny welcomes in a Baldwin team that has lost two straight and is searching for its first winning season since 2003. After a week zero win against Brashear, 47-17, the Fighting Highlanders have been bounced by Thomas Jefferson, 35-19, and Upper St. Clair, 53-14, the last two weeks.

Baldwin head coach Tim Sweeney, who previously revived the football program at Derry and turned the Trojans into a Class 3A contender, is looking to do the same with the Fighting Highlanders. The third-year head coach has a great foundation to build around with talented juniors at running back, receiver and quarterback. Andrew Sharp is a two-year starter at tailback and the team’s leading rusher with 247 yards and five touchdowns on the season. Sharp is also a threat on special teams had had a 70-yard kickoff return for a touchdown in the season opener against Brashear. Speedy wideout Devonte Jones can break off big plays as well and scored on a 90-yard touchdown against Thomas Jefferson in week one. Additionally, Jones scored on a 92-yard kickoff return against North Allegheny last season. The offense is facilitated by quarterback John Kozar, who has passed for 350 yards, two touchdowns and three interceptions so far this year. Kozar gained valuable experience as a starter last season and continues to progress each week.

On defense, junior linebacker Keith Mincin is a hard-nosed tackler and leads the Fighting Highlanders with 27 stops and two interceptions. Baldwin boasts exceptional athletes in the secondary as well, with talented basketball players like Joey Carr and A.J. Cherico coming over to the football team. With a growing roster that is led by an experienced coaching staff, Baldwin is looking to challenge opponents in Class 5A this season in the Allegheny Six Conference.

Baldwin is back in Class 5A in 2022 after spending the last two seasons in Class 6A. NA and Baldwin didn’t play in 2020 due to COVID-19 protocols, but matched up last season for the first time in over 20 years. The Tigers ran roughshod over the Fighting Highlanders a season ago with a 61-14 triumph in the South Hills. Kushner tossed a trio of touchdown passes, while Andrew Gavlik, Aidan Buggey and Evan Lyon all added rushing touchdowns in a rout that saw the Tigers score the first 61 points of the game.  Prior to 2021, the last time NA and Baldwin had faced each other was in the first round of the 1998 WPIAL playoffs. On their way to a WPIAL title game appearance, the Tigers were led by NA Hall of Fame quarterback Brian Eyerman and rolled over the Highlanders, 40-0.