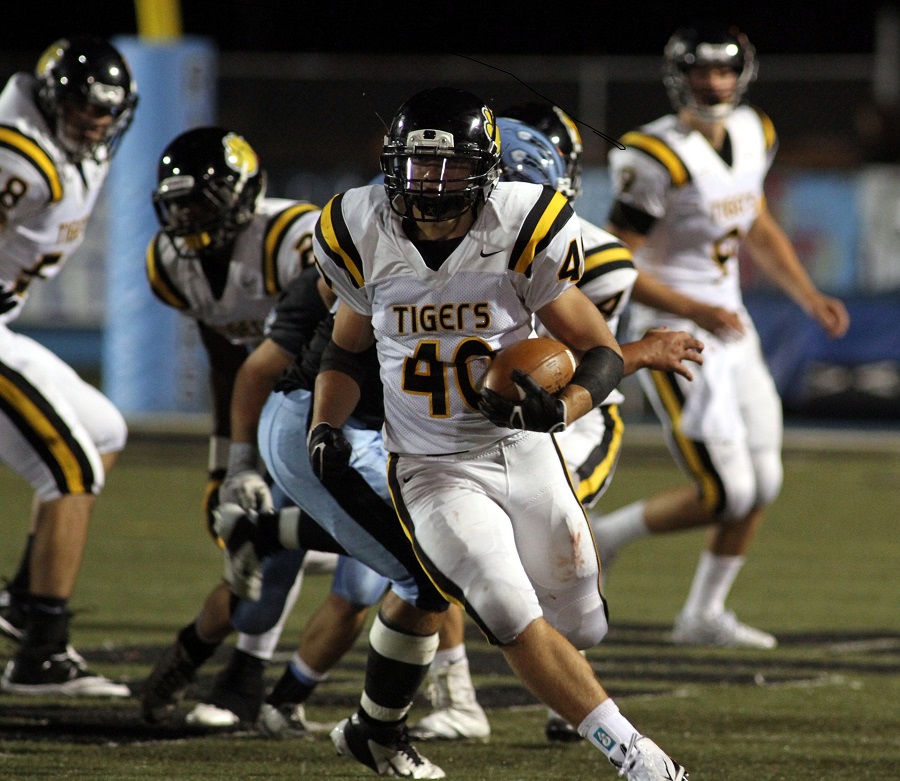 The North Allegheny Football Team opens the 2014 campaign with a road contest against Northern Eight Conference rival Seneca Valley tonight from NexTier Stadium in Harmony, PA. In years past, the Tigers have opened week one with a non-conference opponent but this season NA will dive head first into Northern Eight play against the eighth-ranked ranked team in the state.

The Tigers had a number of key players graduate from last year’s playoff team that finished 7-4 overall and reached the WPIAL quarterfinals. However, expectations at North Allegheny always remain high and the Tigers will turn to senior quarterback Jeff Clemens to lead the offense.  Clemens threw for over 1,000 yards last season and 13 touchdowns, but had his season cut short by a knee injury in the regular season finale at North Hills. With Clemens back under center, the Tigers have an experienced signal caller to direct the offense.

Another player who dealt with off-and-on injuries last season was tailback Josh Bergman.  The senior returns to carry the load in the backfield after rushing for 303 yards on 63 carries in 2013.  Bergman will run through the holes opened by senior linemen like Cole McKenry and Brian Mitchell.  At receiver, Clay Byerly and Brian Coniker are expected to be two of the top targets for Clemens in the passing game.

The Tigers will be anchored on defense by linebacker Layne Skundrich who has led the team in tackles the past two seasons and is one of the top players in Class AAAA at his position.  Byerly returns to play defensive back as the only other every-down returning starter on defense.

Tonight’s opponent, the Seneca Valley Raiders, is coming off a 9-2 finish in 2013 and returns several key cogs to the offense and defense.  Namely, quarterback T.J. Holl is back to run the show for Seneca, a versatile athlete who accounted for over 2,500 yards of offense last season. Holl, the son of head coach Don Holl, passed for 1,804 yards last year and led the team on the ground with 723 yards on 168 carries.  Another top player for the Raiders is 6-5, 285 pound lineman Tyler Hudanik who has received several Division I scholarship offers.

Week one will be the first of a tough opening half of North Allegheny’s schedule which sees the Tigers take on Pine-Richland, Central Catholic and Upper St. Clair in the first four weeks of the season. Despite the rugged schedule, head coach Art Walker will have the Tigers primed and ready for the task at hand. Coach Walker begins his 10th season as NA’s head coach with an overall record of 153-45 in 17 seasons, including his tenure as head coach at Central Catholic.

Kickoff is slated for 7:30 pm tonight with live coverage from NexTier Stadium getting underway at 7:15 pm on the North Allegheny Sports Network.  Lee Mohn and Rick Meister will have the call from Harmony, PA. To listen to tonight’s broadcast, click here!