MaxPreps assembled a list this week of the most dominant football programs in Pennsylvania over the last 10 years. With two state titles and seven Top 25 finishes in that span, the North Allegheny Tigers were ranked the fourth most dominant program of the decade in Pennsylvania. Based on MaxPreps methodology, the Tigers compiled 203 points, the highest of any WPIAL program. St. Joseph’s Prep in Philadelphia was the overall No. 1 team on the list, which can be viewed by clicking here.

While seven different NA teams finished in the MaxPreps Top 25 during the decade, including the 2015, 2017, 2018 and 2019 squads, we will take a look back at the Tiger teams from 2010-2012 that won an unprecedented three straight WPIAL titles in the largest classification and two PIAA crowns. 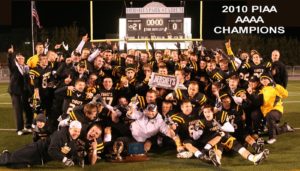 North Allegheny’s decade of dominance began in 2010 with one of the most suffocating defenses in recent memory. The Tigers rolled to a 15-1 record en route to the Class AAAA WPIAL and PIAA championship and did so with a defense that yielded a scant 7.9 points per game. The leader of the defense was linebacker Kevin Cope (John Carroll University), who amassed 159 tackles during the campaign. Cope’s tackle total was easily the best in a single-season by any Tiger in the decade. Additionally, he tallied 6.5 sacks, two forced fumbles, two recovered fumbles and recorded an interception on his way to Big School Player of the Year honors.

While Cope was an outstanding linebacker for the black and gold, he was not the only NA defender that left opponents black and blue. The 2010 PIAA championship team included bookend defensive linemen Rob Kugler (Purdue University) and Justin Haser (Ohio University), who were named the Co-Players of the Year in Class AAAA by the Pennsylvania Sports Writers.  Nate Nachazel (Case Western Reserve University) led the team with 10 sacks. Defensive backs Brandon Coniker (University of Richmond) and Matt Steinbeck (Bucknell University) tied for the team lead with four interceptions apiece. Overall, the NA defense collected four shutouts during the season, including a 21-0 whitewash of LaSalle College in the PIAA championship game.

Offensively, the Tigers were sparked by the Pittsburgh Post-Gazette’s Player of the Year, running back Alex Papson (Gannon University), who rushed for 2,482 yards and 32 touchdowns. Making his rush total even more impressive is that the NA Hall of Famer accomplished it in just 13 games. Papson suffered a dislocated collarbone in North Allegheny’s 21-14 victory in the WPIAL championship game over Woodland Hills and missed the entire state playoff run. In his absence, head coach Art Walker turned to a variety of running backs to fill the void, including Vinnie Congedo (The College of Wooster) who rushed for 142 yards and two touchdowns in the PIAA quarterfinal win over State College, 21-6. In the PIAA semifinals, Steinbeck led the ground attack with 161 yards and threw for a touchdown on a halfback pass as NA defeated Cumberland Valley, 35-17. In the PIAA title win over La Salle College, Steinbeck surpassed the century mark again with 120 yards and a touchdown. Senior quarterback Mike Buchert (John Carroll University) orchestrated the offense beautifully all season long and rushed for two scores in the title tilt. 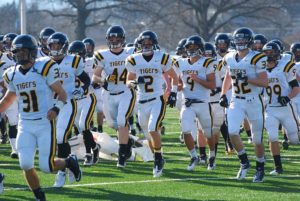 In the 2011, North Allegheny breezed through the Northern Seven Conference with an unblemished record and won playoff thrillers against Gateway and Upper St. Clair to claim a second straight WPIAL title.

In the WPIAL semifinals against Gateway, a Cody Conway field gave the Gators a 17-14 lead with 9:27 remaining in the game. On the ensuing possession, and a drive that epitomized the 2011 Tigers, North Allegheny answered with a marathon 19-play drive that culminated on a 4th and goal from the Gateway 1-yard line. Fullback Nick Passodelis (University of Charleston) plunged into the end zone with just 41 seconds remaining to pull NA ahead, 21-17. Defensive back James Kleinhampl (John Carroll University) preserved the victory with a diving interception deep in NA territory to lock up a second straight trip to Heinz Field.

The roles were reversed in the WPIAL championship game as Upper St. Clair scored a fourth down play late in the fourth quarter to tie the score at 21-21 to force overtime. In OT, North Allegheny bounced back quickly and scored on a 1-yard touchdown run by quarterback Mack Leftwich (University of Texas-El Paso). The Tigers defense held on the ensuing USC possession and back-to-back sacks by Nate Nachazel and Jarred Lux (University of Buffalo – Wrestling) solidified a second consecutive WPIAL crown. Nachazel, along with Zach Lyon (Case Western), tied for the team lead in sacks for the season with nine each. Lux was NA’s leading tackler with 106 for the campaign. 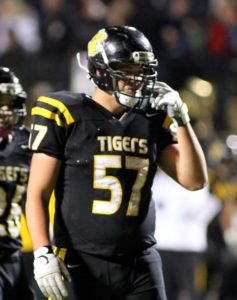 North Allegheny extended its winning streak to 21 in a row before Central Dauphin, the eventual state champs, edged the Tigers in the PIAA semifinals, 23-20. A field goal by CD’s Evan Brandes as time expired ended the NA season.

The 2011 team had three players named all-state, including junior offensive lineman Patrick Kugler (University of Michigan), the Pittsburgh Post-Gazette’s Class AAAA Player of the Year. Leftwich and defensive back Brendan Coniker were also selected to the all-state team.

Coniker and Kleinhampl tied for the team lead with five interceptions each to secure the defensive airways. The NA offensive air travel was navigated by Leftwich who threw for 2,223 yards and 20 touchdowns. He was NA’s leading rusher as well, with 933 yards and 16 more scores. Leftwich rushed for 117 yards and two touchdowns in the WPIAL championship game against Upper St. Clair. 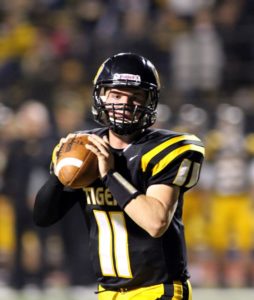 2012
With a perfect 16-0 record in 2012, the North Allegheny Tigers boasted a record-breaking team that will go down as one of the best in program history, and perhaps the best in WPIAL history as well. Boasting a multiple-offense that scored points at will and a defense that was nearly as stingy as the 2010 group, no one could touch the 2012 Tigers.

Finishing the season ranked No. 4 in the country according to the national MaxPreps poll, NA averaged 41.9 points per game and set a PIAA record for most points scored in a state championship game, demolishing Coatesville by a 63-28 decision. Not to be outdone, the NA defense permitted only 8.8 points per game and forced four turnovers in the PIAA championship, personally converting two of those turnovers into touchdowns.

With an average margin of victory of 33.2 points per game, the Tigers ran roughshod through the regular and were in cruise control on the highway to Heinz Field. In the WPIAL championship game, North Allegheny faced its toughest test all year and prevailed, 21-14, in a hard-fought contest against Woodland Hills. Going head-to-head with future NFL running back Miles Sanders (Philadelphia Eagles), North Allegheny built a seven-point lead at halftime on the strength of three touchdown passes by Mack Leftwich. The Tigers defense shutout Sanders and the Wolverines in the second half to secure the win. Sanders, who had 84 yards rushing in the first quarter, was limited to 15 yards on 13 carries in the second half. 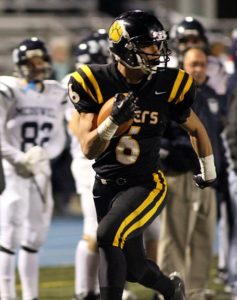 Elijah Zeise returns a pick-six in the PIAA quarterfinals.

In the PIAA quarterfinals, North Allegheny faced another NFL-bound running back in James Connor (Pittsburgh Steelers) and the McDowell Trojans. Connor managed only 36 yards rushing against a smothering NA defense that also forced four turnovers, including a 40-yard interception return for a touchdown by Elijah Zeise (University of Pittsburgh). With five touchdown passes from Leftwich on offense, NA rolled to a 56-6 win over McDowell and followed with a 45-10 victory over Wilson in the state semifinals prior to the 63-28 dismantling of Coatesville in the state championship.

By seasons end, Leftwich was named the Pennsylvania Sports Writers’ Class AAAA Player of the Year and became only the third quarterback in WPIAL history, at that time, to throw for over 3,000 yards in a season. He also threw 45 touchdown passes to just four interceptions, and tossed five touchdown passes in a game three different times. In just two years as starting quarterback for the Tigers, Leftwich amassed over 7,000 total yards and 91 total touchdowns.

During the 2012 season, Leftwich’s favorite target was Greg Garrity (Penn State), another all-state selection, who reeled in 67 passes for 1,240 receiving yards and 18 touchdowns. All of those receiving marks are the best of any NA wideout during the decade. Leading the rushing attack was all-conference tailback Alex DiCiantis (Drexel University – Wrestling) with 1,291 yards and 16 touchdowns. His best rushing performance of the season was a 201-yard effort during a 35-3 thrashing of Pine-Richland in week four. 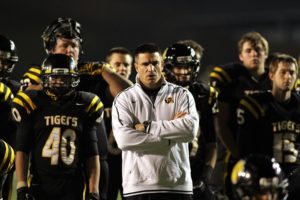 Head coach Art Walker was named the 2012 National Coach of the Year.

Other all-state selections for the Tigers in 2012 included lineman Patrick Kugler and defensive back Brendan Coniker for a second straight year. Tight end Zach Lyon and defensive lineman Jeremy Gonzales were also tabbed all-state. Gonzales paced NA in sacks with 12 on the year, Linebacker Layne Skundrich (Clarion University) led the team in tackles with 96. Zeise and Brett Nuegebauer tied for the team lead in interceptions with three each.

Concluding the laundry list of hardware collected by the 2012 Tigers, head coach Art Walker was named the National Coach of the Year by the National Sports News Service.

During North Allegheny’s remarkable run from 2010-2012, the Tigers posted an overall record of 45-2.