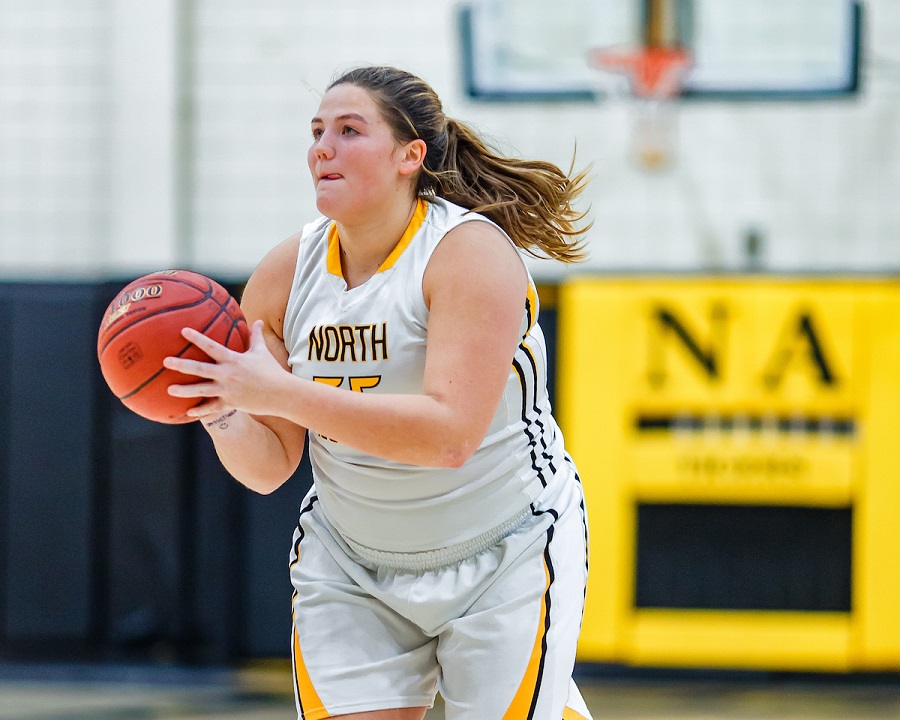 In a battle between two of the finest teams in the states of Pennsylvania and Ohio, it was the Keystone State’s North Allegheny Tigers who came away with a hard-fought 76-68 victory over the Gilmour Academy Lancers on Thursday afternoon at the Wright Automotive Holiday Tournament. With the win, the Tigers advance to the tournament championship on Friday evening at 6:00 p.m.

Coming off a state championship in Ohio’s Division III, the Lancers entered Thursday’s tilt with the Tigers sporting a 9-1 record and boasting several collegiate basketball commits. Gilmour Academy constructed a 14-9 lead in the first quarter and held a 33-31 advantage by halftime. Michigan recruit Naz Hillmon paced the Lancers in the first half with 14 points.

Changing strategies defensively in the second half, North Allegheny head coach Spencer Stefko employed a double team on Hillmon underneath and the move paid off as senior Madelyn Fischer and junior Rachel Martindale combined to stifle the 6-2 forward. Hillmon netted only four more points for the rest of the game and North Allegheny sprung to life offensively with a 17-3 run to open the second half to take a 48-36 lead.

The Tigers shot 57-percent in the second half and used fast break buckets from Piper Morningstar, who totaled 17 points on the night, to help produce the double-digit lead.  North Allegheny led 63-48 in the fourth quarter before Gilmour Academy got hot from beyond the arc thanks to 3-point connections from Annika Corcoran and Sarah Bohn. Corcoran and Bohn finished with 18 and 17 points, respectively.

Gilmour Academy trimmed the deficit to five in the fourth quarter, but timely free throws by freshman Lizzy Groetsch ballooned the Tigers lead to a three-possession advantage and NA pulled away in the waning minutes for a 76-68 win. Groetsch tallied 14 points and eight rebounds.

Playing a key role defending Hillmon, Fischer added 11 points and five boards for the Tigers. Part of the defensive double team with Fischer, Martindale contributed a double-double with 23 points and 12 rebounds and was selected as the Wright Automotive Player of the Game.

North Allegheny remains unbeaten on the season with a 7-0 record. Gilmour Academy dips to 9-2 on the year.