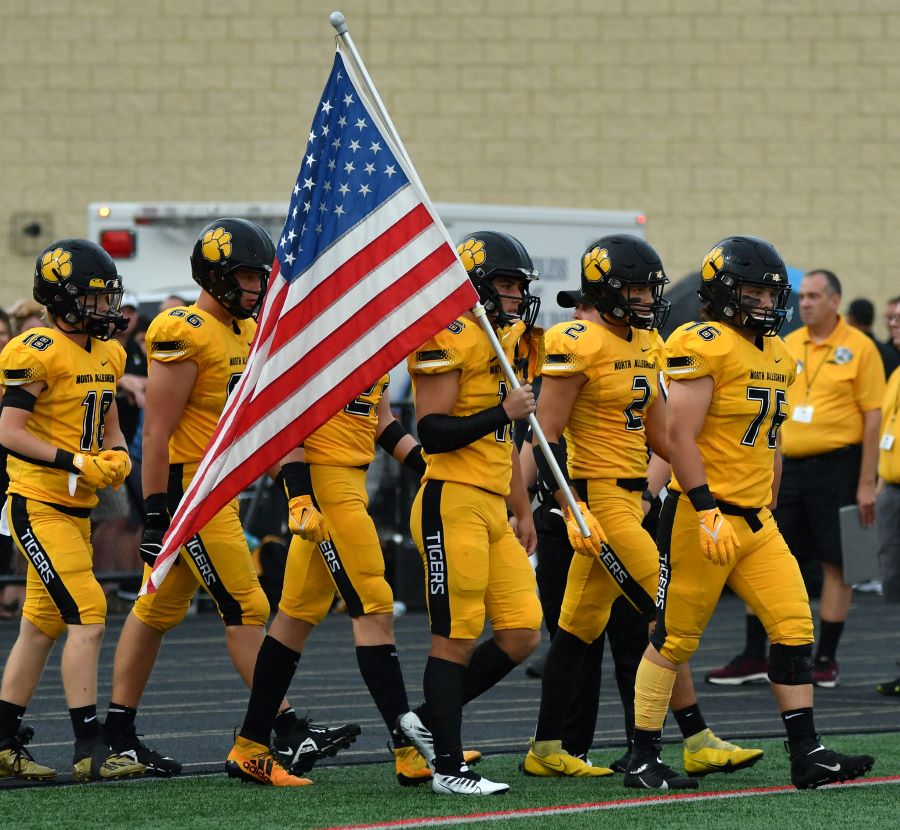 On Military Appreciation Night at Newman Stadium, the North Allegheny Tigers (2-0) take on the McDowell Trojans (2-0) for a week two non-conference fray.

The Tigers are coming off a 35-21 Tri-County Conference win at Canon-McMillan last week. NA built a 27-0 lead, overcame five turnovers, including four in the second half, and put the game way with a fourth quarter touchdown to lock up the victory. Senior running back Andrew Gavlik rushed for 110 yards and three touchdowns, including the game-clinching score in the fourth. Junior Evan Lyon had a phenomenal all-around performance, including a 60-yard rushing touchdown on a reverse, a 47-yard punt return that set up another score and a second half interception. Junior receiver Khiryn Boyd hauled in six passes for 126 yards and a touchdown, while junior quarterback Logan Kushner was 11-for-18 for 180 yards, one touchdown and one interception. Defensively, Kevin O’Donnell led the team with eight tackles and a pair of sacks.

A perennial power out of District 10, McDowell has reached the state playoffs five consecutive seasons and reached the PIAA quarterfinals in 2021 before falling to eventual state champion, Mt. Lebanon. The Trojans boast a pair of impressive non-conference wins against premier out-of-state opponents, including a 56-37 win over Walsh Jesuit (OH) in week zero and a 34-28 overtime victory against Bennett (NY) last week.

McDowell has piled up the points on offense thanks to an effective run game that is spearheaded by senior running back Artis Simmons. Simmons rushed for over 1,200 yards last season as a junior, and so far this season, he’s toted the ball 43 times for 381 yards and three scores. Simmons had a 295-yard rushing performance against Walsh Jesuit in the season opener. Simmons runs behind a big and burly offensive line that is anchored by Penn State commit, Cooper Cousins.

The Trojans employ a two-quarterback system with senior Ben Moore as the top passing QB with 264 yards and four touchdowns through the air, along with 60 rushing yards and two more scores on the ground. Senior Christian Santiago is a Swiss-army knife, who will line up all over the field, including at wide receiver.

McDowell is coached by Bo Orlando, a 1996 graduate of McDowell and former Penn State linebacker and pitcher on the Nittany Lions baseball team.

Tonight’s meeting between North Allegheny and McDowell is the first since the 2012 PIAA quarterfinals. Enroute to a PIAA championship that year, the Tigers rolled through the Trojans for a 56-6 win. NA quarterback Mack Leftwich was nearly perfect by completing 14-of-15 passes for 284 yards and five touchdowns, while also rushing for another score. Receiver Greg Garrity caught seven passes for 128 yards and touchdowns. Defensively, Elijah Zeise added a 40-yard interception return for a touchdown. McDowell running back James Conner, now with the Arizona Cardinals, was held to a paltry 36 yards rushing in the game.

Kickoff for tonight’s game is slated for 7:30 p.m. The game will be broadcast live by the North Allegheny Sports Network with the pregame show beginning at 7:10 p.m. To listen to tonight’s game, click here.