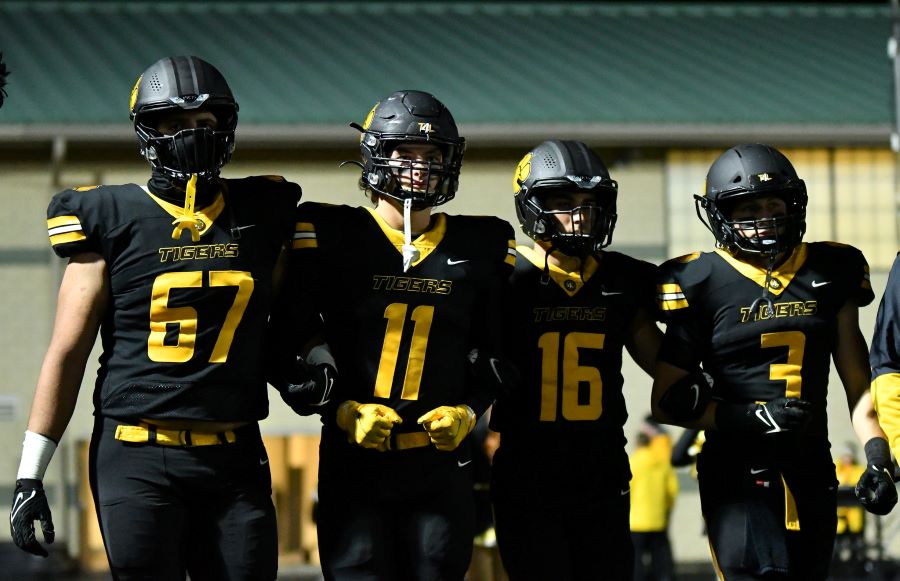 The North Allegheny Tigers (7-1) host the Penn-Trafford Warriors (5-3) tonight for a non-conference clash at Newman Stadium. This evening is also a Pink Out Night in support of cancer awareness and the Crucial Catch mission to fight cancer through early detection.

The top-ranked team in Class 6A with a 3-0 conference mark, the Tigers hope to pick up a second straight non-conference victory after a 38-13 triumph at Norwin last week. NA bulldozed its way to a win with 272 rushing yards and two rushers of 90-yards or more. Senior Steve Palermo toted the ball 20 times for 92 yards, while junior wideout Khiryn Boyd raced 77 yards with a second quarter touchdown and finished with 96 yards on the ground. Junior running back Tyree Alualu racked up 61 yards on 13 carries with two rushing scores. While the NA rushing attack powered the offense, the Tigers defense was once again dominant and sacked quarterback Jackson Pons four times, including a safety by Daniel Sellers in the second quarter.

Penn-Trafford is the reigning PIAA champions in Class 5A, but following the graduation of several key players, the Warriors have been fighting for their playoff lives in 2022 with a 2-2 conference record. In desperate need of a conference win last week in Class 5A’s Big East Conference, Penn-Trafford also turned to a highly effective rushing attack enroute to a 35-21 win over Plum. Penn-Trafford punished Plum with an eye-popping 377 rushing yards, led by senior running back Owen Demari with 190 yards and two touchdowns. Senior quarterback Conlan Greene added 131 yards rushing and three touchdowns.

On the season, Greene has been the Warriors lead warhorse with 638 yards on the ground, while passing for 1,140 yards, eight touchdowns and 11 interceptions. Standing at 6-4, 250 pounds, Greene is a physical runner who is tough to corral. Greene is a Temple University recruit for his defensive prowess as an edge rusher and totaled nine sacks to lead Penn-Trafford in their state title run last season. As if a 250-pound ball carrier is difficult enough on opponents, the Warriors also boast a big and burly offensive line, anchored by senior center Joe Enick. A Trib Live preseason all-star, Enick is committed to Central Michigan and leads the defense in 2022 with five sacks from his nose tackle position.

Two teams that rarely face each other, tonight will mark the first time since the 2014 WPIAL Class 4A quarterfinals that North Allegheny and Penn-Trafford will meet. In 2014, second-seeded Penn-Trafford rallied from a 10-point fourth-quarter deficit to beat the seventh-seeded Tigers, 35-31, in a playoff classic. PT quarterback Brett Laffoon (Grove City) led the comeback with 280 yards passing and five touchdowns, connecting with Timmy Vecchio (Robert Morris) for 197 yards and three ariel scores. The Tigers were paced by running back Josh Bergman with 62 yards and two touchdowns, and Ethan Maenza added a 55-yard touchdown run on a reverse. Maenza would later go on to become the Class 6A Player of the Year in 2016 for the Tigers and had a terrific collegiate career at Dartmouth.