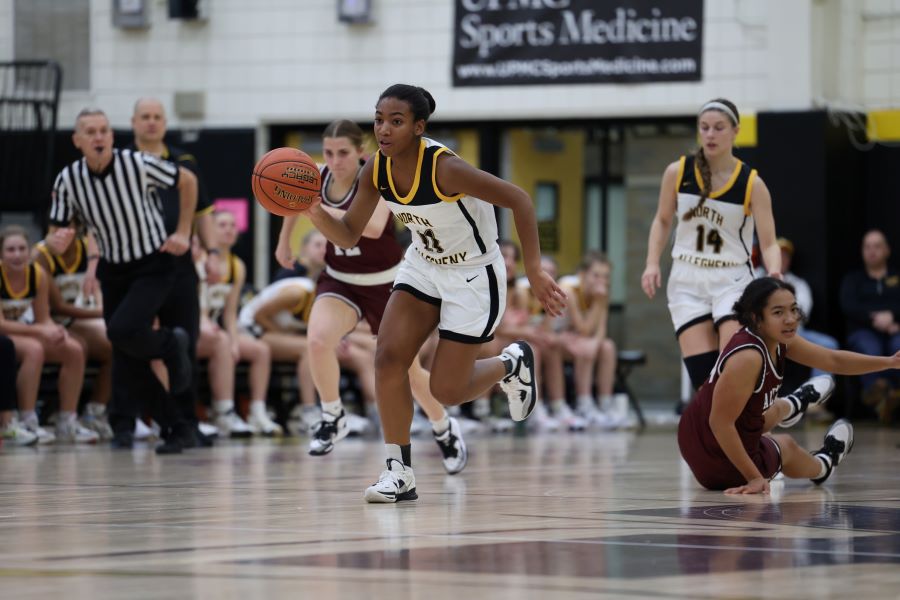 The second-ranked North Allegheny girls’ basketball team opened the 2022-23 season on Friday night with a 78-64 win over Altoona at the Wright Automotive Tip-Off Tournament. It was the Tigers 10th consecutive win in the head-to-head series with Altoona, a perennial Class 6A title contender in District 6.

Junior forward Lydia Betz scored the first six points of the game to spark an early 7-0 lead for the Tigers in the first quarter. The lead swelled to 34-21 by the late stages of the second quarter before Altoona sophomore Malena Eyer knocked down back-to-back 3-pointers in the final minute of the half to trim the NA advantage to 34-27 at intermission.

Altoona continued its comeback bid in the second half thanks to the torrid shooting of Eyer who scored 19 points in a seven-minute span, cutting the deficit to 45-44 with two minutes left in the third quarter. Eyer finished with a team-high 21 points and buried five 3-pointers.

While the Mountain Lions clawed back into the game, they could come no closer as North Allegheny immediately answered with an offensive rebound and put-back layup by junior Caroline Henderson for a 47-44 lead with 1:44 left in the third. Junior Kellie McConnell, making her return after missing all of last season with a knee injury, sparked a 5-2 run with a 3-pointer and layup and the Tigers’ lead ballooned to 52-46 with just under a minute remaining in the third period.

Despite a valiant comeback bid by Altoona, North Allegheny continued to add on to its lead and pulled away in the fourth quarter for a 78-64 win. Betz led the way with a 23-point night, including 13 points in the second half, adding a bevy of rebounds and steals. For her efforts, Betz was named the Wright Automotive Player of the Game.

Along with Betz, senior Jasmine Timmerson netted 18 points, McConnell netted 12 points and senior Cam Phillips chipped in with 10 points a pair of 3-pointers. Similar to NA, four players finished in double figures for Altoona. Aside from the 21-point performance by Eyer, junior Jaiden Krull tallied 14 points, while senior Taylor Lane and sophomore Lanie Wilt scored 10 points each. Wilt buried a trio of treys in the first half.

Looking to build on the season-opening victory, North Allegheny plays host to Penn Hills in day two of the Wright Automotive Tip-Off Tournament. Start time is slated for 1:30 p.m. The game will be broadcast live by the North Allegheny Sports Network.