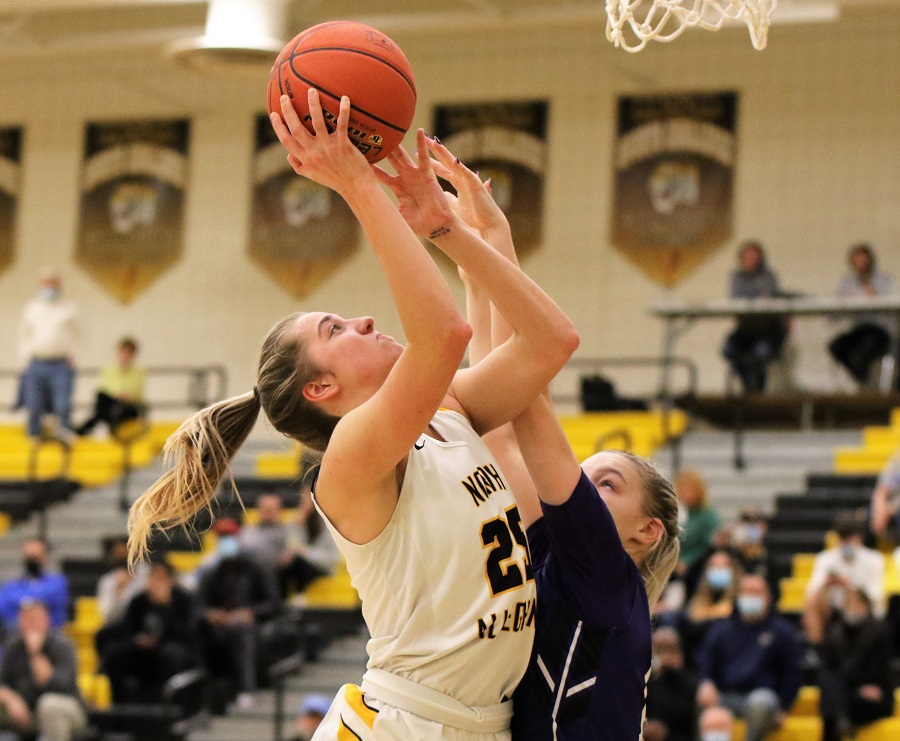 In a rematch of last year’s WPIAL Class 6A quarterfinals, the North Allegheny girls’ basketball team outlasted the Baldwin Highlanders on Wednesday afternoon, 60-54, at the Wright Automotive Holiday Tournament. The win was NA’s 16th in a row and 45th in the last 46 games.

While the end result was the same as last year’s playoff victory for the Tigers, the path to get there was far different in this Holiday Tournament matchup. Baldwin led most of the first half and maintained a 27-26 lead at intermission thanks to a strong defensive and rebounding effort. Around the glass, senior forward Heidi Johnston scored seven of her 11 points in the first half and junior Gianna Schoeb frustrated the Tigers by drawing four charges on defense. Schoeb finished with a team-high 15 points.

Despite being held in check in the first half, North Allegheny caught fire in the third quarter and opened the second half on a 16-4 run for a 42-31 lead. The Tigers buried four 3-pointers in the second half, two by sophomore Grace Heliger and one each courtesy of sophomore Caroline Henderson and senior Emma Fischer. All three players totaled eight points and two treys each.

While the Tigers may have surged ahead in the third quarter, they couldn’t quite blow the game open as Baldwin chipped away and trimmed the score to 52-49, Tigers, late in the fourth quarter. Highlanders’ sophomore Katie Lucarelli scored 10 of her 11 points in the second half to keep things close. Senior Morgan Altavilla also tallied double figures for Baldwin with 12 points.

The scrappy Highlanders hung tough but ultimately couldn’t overcome the reigning PIAA champions, who fended off Baldwin for a 60-54 victory. Junior Jasmine Timmerson paced the Tigers with a team-high 18 points and several timely steals.

Another key factor in the victory was North Allegheny’s ability to change the momentum on the boards in the second half. The sparkplug in the paint was junior Mia Tuman, who scored six second-half points and pulled down numerous offensive and defensive rebounds. Her efforts also limited Johnston to just four points in the second half. For her pivotal performance on the glass, Tuman was tabbed the Wright Automotive Player of the Game by the North Allegheny Sports Network.

North Allegheny improves to 6-0 overall with the non-section victory, while Baldwin dips to 6-3 on the season. The Tigers will return to Section 1-6A action with a home game against the Norwin Knights on Monday night at 7:30 p.m. The game will be broadcast live by the North Allegheny Sports Network.