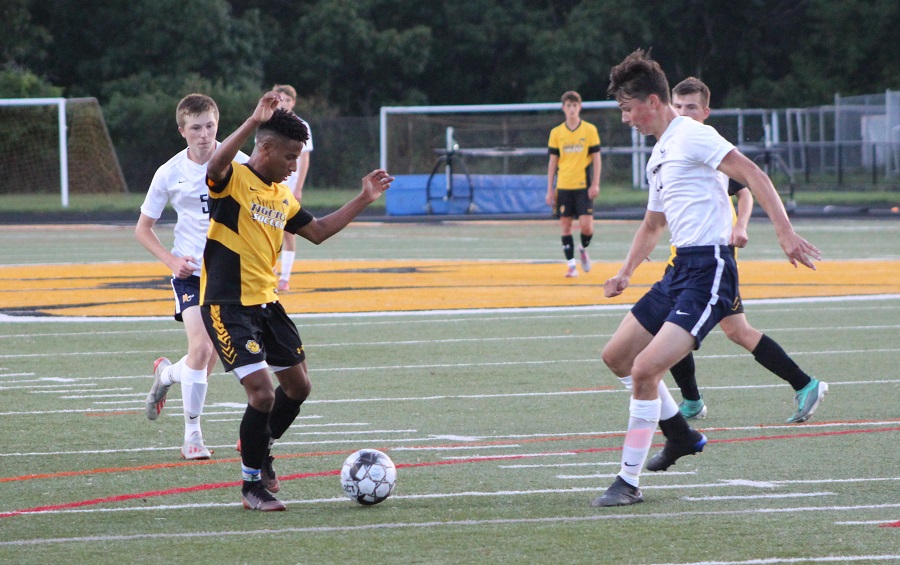 Kensly Owens scored four goals in the first half and North Allegheny added four more in the second half as the Tigers rolled past North Hills 8-0 on Thursday night at Newman Stadium.

Owens’ first goal came five minutes into the game when he navigated through the Indians defense with no resistance and put a shot in the back of the net for a 1-0 lead. His next goal came three minutes after that when he got a great cross into the box and showed great athleticism to deflect the ball in the air and make the game 2-0. With 25:16 left in the first half, Owens took a shot from 25 yards out that went top right corner and it was all working for him and the Tigers as they led 3-0. The final goal for Owens came with 18:44 remaining in the half as he once again was able to speed past all of North Hills’ defenders and score to give the Tigers a 4-0 lead at the half.

The second half started slow from a scoring standpoint. North Allegheny had numerous opportunities to add on with several point-blank chances and three posts were hit. Finally with eight minutes left in the game Sean Moore scored his first goal of the season giving NA a 5-0 lead. Three minutes later, Evan Anderson picked up his first goal of the game and then scored again 40 seconds later, and the route was on, as the Tigers were up 7-0. Evan Cole picked up his first of the year for good measure and when the final horn sounded the Tigers came out with the 8-0 win.

Owens was the Wright Automotive Player of the Game picking up four goals in less than a twenty minute span. Regan Racicot and Mikkel Hindsbo combined for the shutout.

North Allegheny improves to 3-1-1 overall and 2-1-1 in section play. North Hills falls to 0-3 overall and in the section. Up next for the Tigers will be a meeting with Fox Chapel, Saturday, at 5:30 p.m. at Newman Stadium. This game will be broadcasted live on the North Allegheny Sports Network.