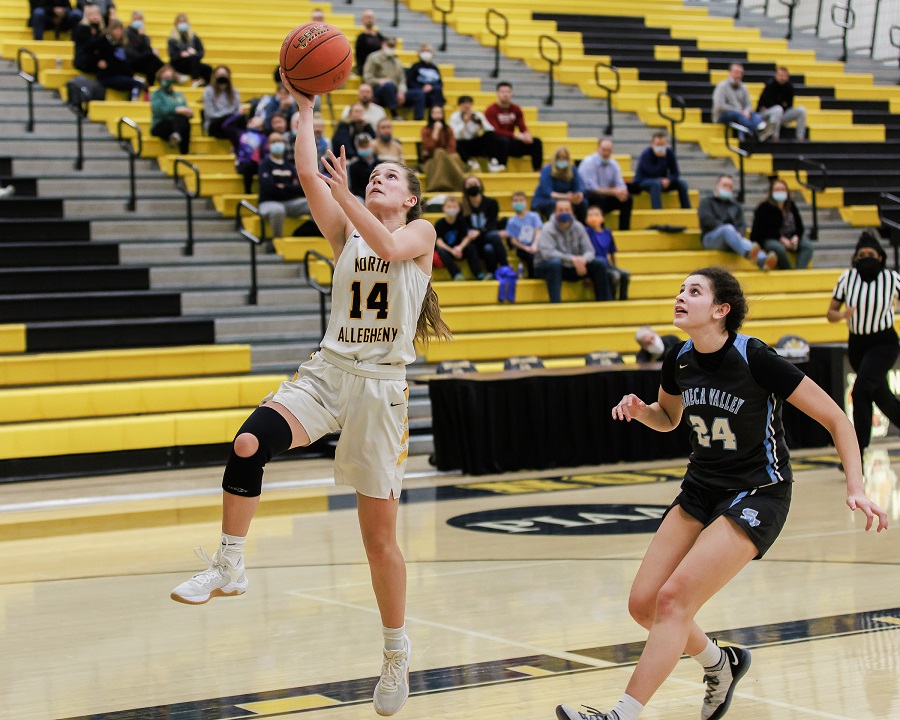 Shooting lights out from beyond the arc, the North Allegheny girls’ basketball team defeated the Seneca Valley Raiders on Wednesday night, 65-47, in the WPIAL Class 6A quarterfinals at UPMC Court. The Tigers knocked down 11 3-pointers to take control of the game and advanced to the WPIAL semifinals for the ninth consecutive season.

The tone was set from the very start by senior Emma Fischer with a 3-pointer to give NA a 3-2 lead in the opening minute of the first quarter. The opening stanza maintained a free flowing pace by both teams with the Tigers leading 14-10 at the end of one.

Seneca Valley senor Olivia West, who scored 36 points in a loss against North Allegheny on Feb. 7, once again paced the Raiders with a big night and helped trimmed NA’s lead to 19-17 early in the second quarter. West netted a game-high 29 points and scored her 1,000th career point later in the fourth quarter.

North Allegheny used an 11-2 run to regain control and held a 30-19 lead in the final minute of the second quarter. It was a well-balanced effort in the first half with six different Tigers touching the scoresheet, led by Fischer’s nine points. The Seton Hill commit totaled 12 points on the night on four 3-pointers.

A West trey just before intermission brought the score to 30-22, North Allegheny, at the half. That was as close as the Raiders would come as the second half belonged to the Tigers.

Continuing NA’s torrid shooting from beyond the arc, junior Cam Phillips knocked down three consecutive 3-pointers to open the third quarter and increased the lead to 39-22. Phillips scored all 13 of her points in the second half and was named the Wright Automotive Player of the Game for sinking Seneca Valley’s faint comeback hopes.

After the three long-distance daggers delivered by Phillips, the Tigers cruised the rest of the way to a 65-47 victory. Joining Fischer and Phillips in double figures were junior Jasmine Timmerson and senior Taylor Rawls, who scored 17 and 11 points, respectively.

North Allegheny improves to 21-2 overall on the season, while Seneca Valley’s season comes to an end with an 11-11 campaign. The Tigers advance to the WPIAL Class 6A semifinals to face the Upper St. Clair Panthers in a rematch of last year’s WPIAL title game. The game will be broadcast live by the North Allegheny Sports Network.