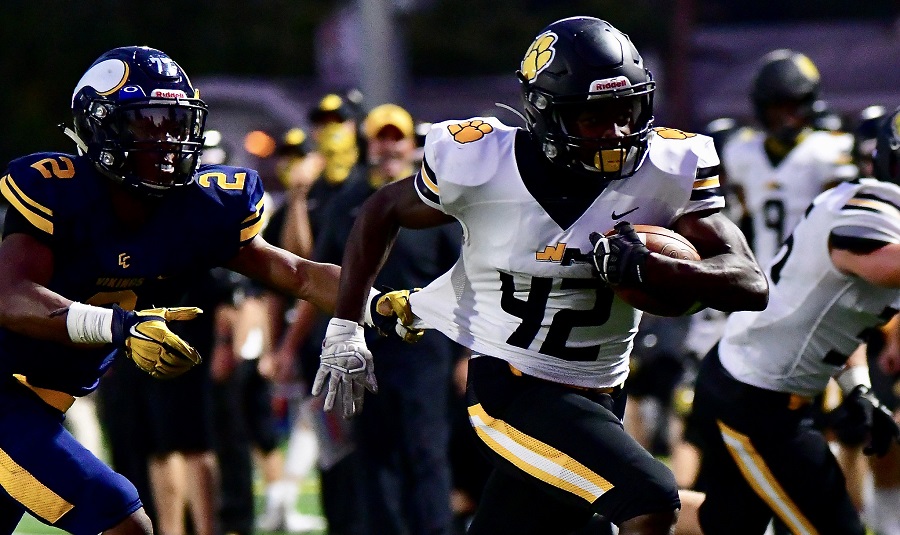 In a battle between the top two ranked teams in Class 6A, the North Allegheny Tigers defeated the Central Catholic Vikings on Friday night, 35-21, at UPMC Graham Field in Wilkinsburg. The NA defense limited Central Catholic’s star running back Eddy Tillman to just 17 yards and intercepted three passes in the victory.

The Tigers opened the game by forcing a three-and-out of the Vikings to help set up a short field for the NA offense. Starting the drive at the CC 44-yard line, a 33-yard screen pass by Ryan Treser to Mason Kress set up the first score of the night. On the very next play, running back J.R. Burton scored on a 9-yard touchdown run to give North Allegheny a 7-0 lead with 9:37 on the first quarter clock. Burton finished the night with 108 yards on 13 carries.

The NA lead was short-lived, however, as Central Catholic’s Brandon Jackson returned the ensuing kickoff 93 yards for a touchdown and the game was immediately tied at 7-7.

Later in the first quarter, a 28-yard punt return by Kress set up North Allegheny for another short field at the Central Catholic 18-yard line. After a 15-yard run by Burton to the Vikings’ 3-yard line, Burton toted the football on the next play but fumbled into the end zone. Despite a dubious start to the play, North Allegheny center Ben Withrow alertly recovered the fumble for a touchdown and a 14-7 lead with 2:23 remaining in the first quarter.

The second quarter was a defensive stalemate, but Central Catholic had an opportunity for one last drive before halftime. Starting from midfield with 1:30 left in the second quarter, the Vikings drove into NA territory but were turned away with an interception by linebacker Brady Leczo at the Tigers 26-yard line and the score remained, 14-7.

In the third quarter, North Allegheny utilized a power rushing attack that was spearheaded by Leczo. The eight-play, 58-yard drive culminated on a 4-yard touchdown run by Khalil Dinkins to increase the Tigers lead to 21-7 with 2:59 remaining in the third quarter.

Forced to get away from their preferred ground game, Central Catholic attempted to rally on the passing arm of quarterback Brandon Pezzelle. However, the Vikings ensuing possession was short-circuited when Pezzelle threw an interception to Dinkins, who returned the pick 40-yards for a score and a 28-7 lead.

Looking for a spark, Central Catholic turned to backup quarterback Adam Obrin. Early in the fourth quarter, Obrin led a 43-yard drive that he personally punctuated with a 4-yard touchdown run to trim the NA lead to 28-14 with 8:55 left to play.

North Allegheny answered with a time consuming, game-clinching drive that was once again paced by the rushing attack. Leczo finished the five-minute possession with a 2-yard touchdown run for a 35-14 advantage with 3:50 remaining.

Leczo totaled 46 yards rushing on eight carries on offense, to go along with an interception and a sack on defense. For his efforts, Leczo was named the Wright Automotive Player of the Game.

With the game out reach, Central Catholic mounted one last scoring drive, concluded on a 1-yard touchdown run by Tillman with 45 seconds left, to bring the final score to 35-21, North Allegheny.

With the victory, North Allegheny improves to 2-0 overall and 1-0 in the Quad County Conference. Central Catholic falls to 2-1 overall and in conference play. The Tigers will play host to Mt. Lebanon next week.