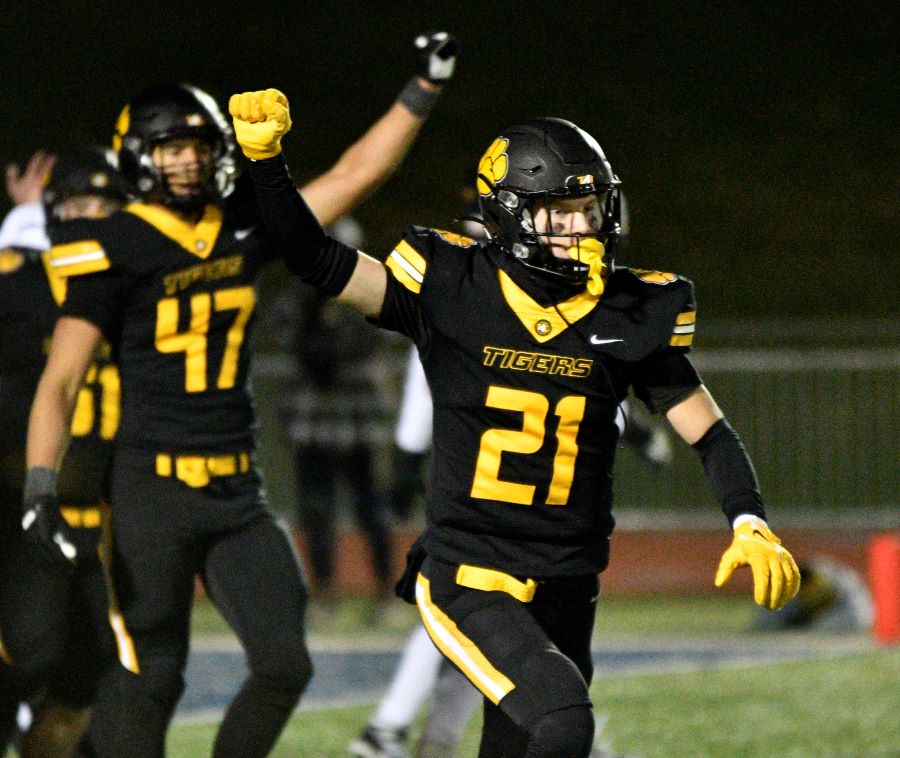 The North Allegheny Tigers (11-1) return to the PIAA football playoffs for the first time since 2012 with a PIAA Class 6A quarterfinal clash with the State College Little Lions (12-0).

The Tigers are coming off a thrilling WPIAL championship win over Central Catholic, 35-21, to capture the program’s fifth WPIAL crown. Tied 21-21 at the half, North Allegheny surged ahead on a 45-yard touchdown run by Logan Kushner in the third quarter and grabbed a 35-21 lead when senior running back Andrew Gavlik powered his way into the end zone from 18 yards out on the first play of the fourth quarter. The NA defense took it from there by shutting out the Vikings in the second half, including a crucial goal-line stand with 5:18 left in the game to seal the win. Kushner finished with 195 yards rushing and a touchdown, to go along with 130 yards passing and two scoring aerials. Junior wideout Khiryn Boyd hauled in two passes for 119 yards and two touchdowns and provided lockdown coverage on defense.

Following their WPIAL title win, the Tigers now turn their attention to the state playoffs and the undefeated State College Little Lions. The District 6 champs are appearing in the PIAA playoffs for the eighth time in the last nine years. State College is 12-17 all-time in the PIAA playoffs with their deepest run in 2009 finishing as PIAA runners-up with a 24-7 loss to La Salle College.

This year’s version of the Little Lions might be the best in program history with an offense that averages just shy of 40 points per game and a defense that yields 17 points per game. State College is coming off a thriller of its own in the PIAA first round, defeating McDowell 57-50 in triple overtime last week.

The Lions’ nickname might say “Little” but their offensive line is far from it. A big burly offensive front is anchored by seniors and twin brothers, Michael and Thomas Dincher. Both are receiving Division I offers and tip the scales at 300 pounds. Running behind that line is arguably the best freshman running back in the country, D’Ante Sheffey. The first-year back has toted the football for 1,576 yards this season and 21 touchdowns. Sheffey is paired in the backfield with senior Matt Wall, who has rushed for 375 yards and six touchdowns. At quarterback is senior Finn Furmanek, who has passed for 1,476 yards and 15 touchdowns with just four interceptions. Furmanek is also effective as a runner, toting the football 74 times for 440 yards and five touchdowns on the ground. Receivers Dante Nastasi and Ty Salazer both have over 500 yards receiving and have combined for nine touchdown catches on the year.

On defense, standouts include Harvard commit Stephen Scourtis and senior edge rusher John Scott. Scourtis is second on the team in sacks with 7.5 and Scott is the Mid-Penn Commonwealth Conference Defensive Player of the Year with a team-high 91 tackles and four sacks. Scott has offers from Butler and New Hampshire. The team leader in sacks is sophomore lineman Sean Mayer with eight sacks. Salazer, a sophomore cornerback, has thieved the most passes in the State College secondary with five interceptions on the campaign.

State College is coached by Matt Lintal, a State College grad and product from Franklin & Marshall College. He is in his 16th year of coaching and fifth as head coach of the Little Lions. Lintal was recently named the Mid-Penn Commonwealth Conference Coach of the Year.

North Allegheny is led by head coach Art Walker, Jr. He has a career record of 231-67 overall and was recently named the WPIAL Class 6A Coach of the Year.

Tonight’s matchup between North Allegheny and State College will mark the third ever playoff meeting between the two teams. The Tigers defeated the Little Lions 21-6 in the 2010 PIAA quarterfinals enroute to a state championship. The schools met up again a year later in the 2011 PIAA quarterfinals and the Tigers won that contest as well, 40-14. In most recent meeting in 2011, quarterback Mack Leftwich (UTEP) accounted for six total touchdowns, rushing for 186 yards and five scores. He added another 166 passing yards and a touchdown. Running back Vinnie Congedo (College of Wooster) also rushed for over 100 yards as the Tigers bulldozed their way into the PIAA final four.

North Allegheny has a 9-1 record all-time in the PIAA playoffs. The last state playoff appearance for the Tigers in 2012 ended in triumph with a 63-28 win over Coatesville in the PIAA championship game at Hershey Park Stadium. At the time, the 63 points scored was the record for most points in a state championship game in any classification. That mark has since been broken by Southern Columbia’s 74-point effort in 2019. The 91 combined points in the game remains the PIAA championship record for combined points scored. An individual mark that remains intact from that contest is the record for longest fumble return for a touchdown in a PIAA title game by Brendan Coniker (Richmond), who raced 80 yards for a touchdown.

Kickoff for tonight’s game is slated for 7:00 p.m. in State College. As always, the game will be broadcast live by the North Allegheny Sports Network with the pregame show set for 6:40 p.m. Randy Gore and Jonathan Spina have the call. To listen to tonight’s game, click here.