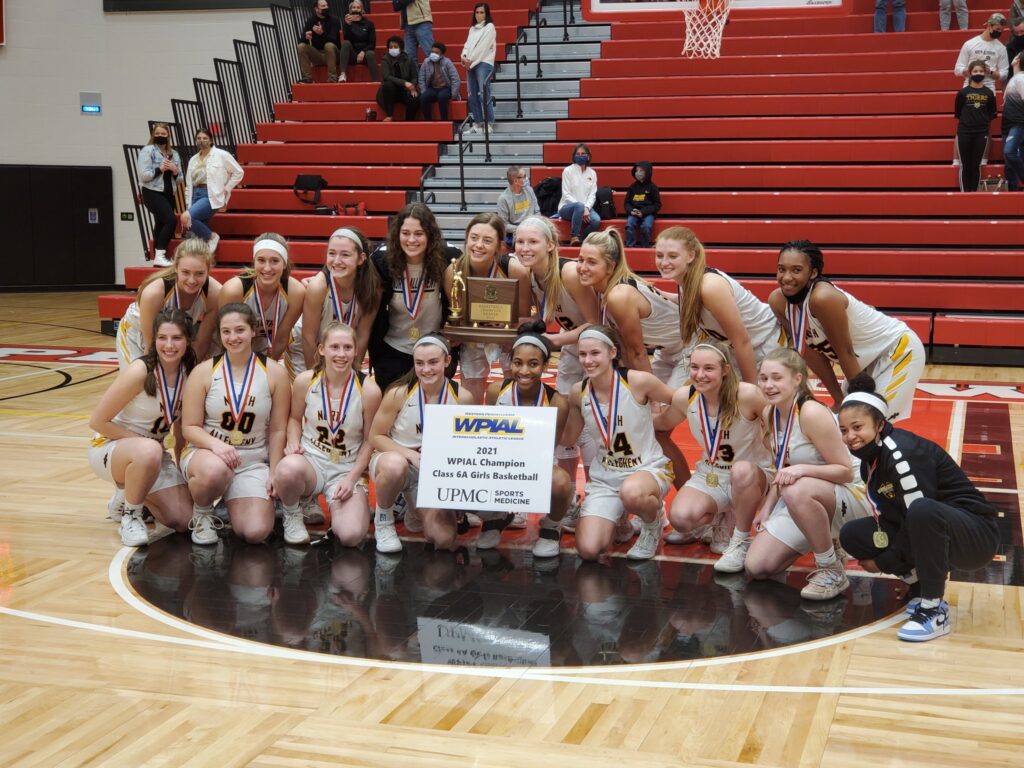 In convincing fashion, the North Allegheny girls’ basketball team won its fourth WPIAL Class 6A championship in five years with a 70-36 triumph over the Upper St. Clair Panthers on Saturday night at AHN Arena. The victory was not only NA’s second consecutive WPIAL title but also marked the second time in four years that the Tigers have mercy-ruled an opponent in the championship game. NA also mercy-ruled Peters Township in the 2018 WPIAL title tilt, 79-48.

Saturday’s date with Upper St. Clair marked the fifth time in the last four years North Allegheny has faced the Panthers in the postseason. The Tigers won each of the previous four playoff contests with the Panthers and this meeting would be no different.

In the first 16 minutes, a young Upper St. Clair team hung tough with NA in a first half that featured four lead changes. Trailing 19-16 following a Lizzy Groetsch 3-pointer, the Panthers went on an 6-0 run, capped by a pull-up jumper from just inside the perimeter by Alex Prunzik, to grab a 22-19 lead with 2:53 remaining in the second quarter.

As was the trend in the first half, each time Upper St. Clair made a positive play, Groetsch had an answer. Just moments after the Prunzik basket, Groetsch again countered with a 3-pointer and a layup to put NA back on top, 24-22, with 1:45 remaining before halftime. With 16 points in the first half, and finishing with a game-high 24 points on the night, Groetsch was named the Wright Automotive Player of the Game.

NA ended the half on a 10-2 run as senior Paige Morningstar tacked on a 3-pointer and freshman Kellie McConnell drove the lane for a layup before intermission for a 29-24 lead.

Midway through the third quarter, North Allegheny led 41-32 before a game-clinching 24-0 run put the game squarely in the hands of the Tigers. Morningstar sparked the run with 11 of her 16 points coming in the second half. Morningstar also played an important role in slowing down USC sophomore forward Kate Robbins, who was held to just six points in the game. Additionally, sophomore Jasmine Timmerson flustered the Panthers with her quick hands and timely steals, creating countless turnovers and turning them into a 13-point night.

The title-clinching run continued into the fourth quarter and NA invoked the mercy rule when sophomore Cam Phillips hit a 3-pointer with 6:10 remaining in the game for a 63-32 lead. The 24-0 run was capped on a short jumper by Emma Fischer with 4:55 to play and the countdown to a championship was on.

Head coach Spencer Stefko, who was coaching his ninth straight WPIAL championship game, emptied the bench in the waning minutes as every active Tiger saw the floor to close out a 70-36 victory. Upper St. Clair was led by Paige Delicarri and Alex Prunzik with eight points each.

North Allegheny improves to 24-1 overall and advances to the PIAA playoffs next week. Upper St. Clair’s season comes to an end with a 15-3 record, with two of their losses to North Allegheny. The Tigers will open the state playoffs in the quarterfinal round on Friday night. The game will be broadcast live, audio only, by the North Allegheny Sports Network.

Trophy presentation for the 6A Champs! pic.twitter.com/RdKTxTE080