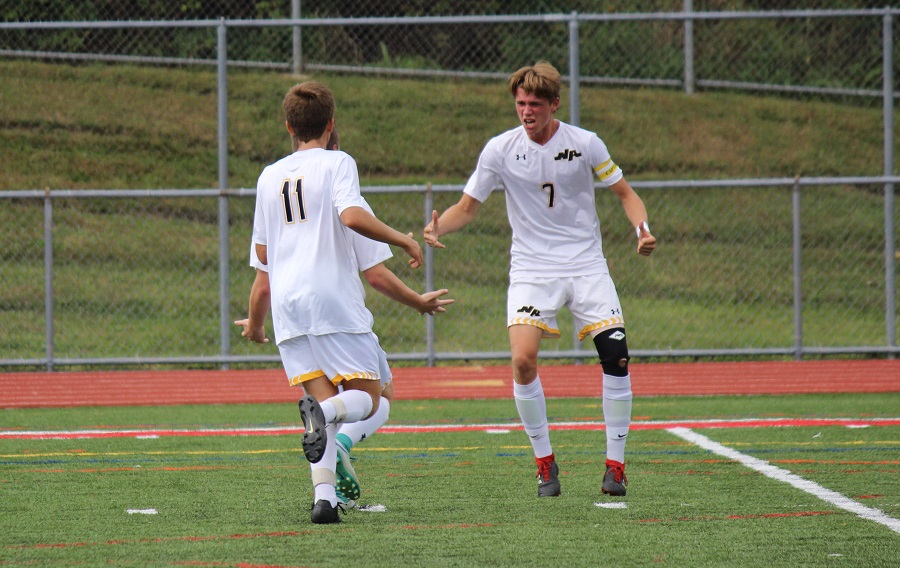 Senior captains Nico Ramirez and Nick Bridges stood at midfield awaiting the coin flip on what felt like a very hot summer day at Fox Chapel Stadium, however it only was mid-September.  The Tigers have missed Ramirez’s offensive prowess as one of the top returning weapons in the attack still out due to a lower body injury.  Bridges, after missing the last two games, returned triumphantly, delivering the only goal in a 1-0 North Allegheny victory against Fox Chapel.

The Tigers offense began a little sluggish through the first ten minutes, but quickly generated a quality opportunity at the 31:30 mark.  A flick behind the defense from senior forward Sam Wilson found junior forward Jonathan Ross who volleyed it off the crossbar.  Only three minutes expired before the next quality chance was converted.  In a sequence that started deep in the Tigers zone when junior midfielder Will Cinker, took possession from a FC attacker, quickly finding Ross on the left wing who initiated a give and go with Wilson.  Once receiving the clean touch back from Wilson, Ross delivered a perfectly placed, rolling cross to a streaking Bridges coming from the right wing who brilliantly buried the one and only goal of the game, bottom right past the diving FC goalie.  Mass substitutions on both sides began early on this blistering Saturday.  Notably junior midfielder Andrew Solman, seeing his first action of the young season, brought a physical style of play matching up well with the Foxes’ midfielders.  Junior midfielder Sam Passodelis used his speed to beat the defender to the left corner and delivered a well-placed cross to junior Bryce Boroughs, but the shot was then pushed wide of the net.

Coach Vosmaer made a change at goalkeeper to start the second half with senior Grant Baierl taking over for senior Devon Angermeier.  Shortly after the kick-off a quick offensive chance developed for NA when at the 37:01 mark, Cinker beat his defender and delivered a looping cross from the right that found Ross at close range in the box, but was quickly defended well and a shot was pushed wide of the net.  At 36:10, Bridges took a rough foul from an over-aggressive Foxes defender forcing him out of the game.  Junior Jack Walsh replaced Bridges and immediately served a beauty of a swinging corner kick into the box that was quickly cleared by the Foxes.  At 19:55, senior midfielder Michael Mitole was inserted to inject some much-needed energy to the midfield.  Offensive chances were limited for the Tigers the rest of the way, with only Passodelis creating a quality chance with a burst of speed breaking away from the defense but was unable to convert on the scoreboard.  Team defense was challenged persistently throughout the second half and these 2018 Tigers were up to the task.  Stellar defensive play by senior captain and center back duo of Austin Smith and Brennan Donovan continued again this day clearing and stopping dozens of offensive attacks by the Foxes, protecting the inside.  Senior defenders Drew Hunker and Nikolaj Hindsbo paired with junior defenders Ryan Schwartz and Jason Roman on the outside to ensure the defense was protecting the lead while intense pressure from the Foxes was maintained throughout most of the half.

On the day, the Tigers outshot the Foxes 10-8, had an edge in direct free kicks, 15-13, and had one less corner kick than the Foxes, 7-6.  With their third shutout of the season, the Tigers improve to 4-1 in the section, 5-1 overall and resume section play at Shaler this Tuesday at 7:30 p.m.