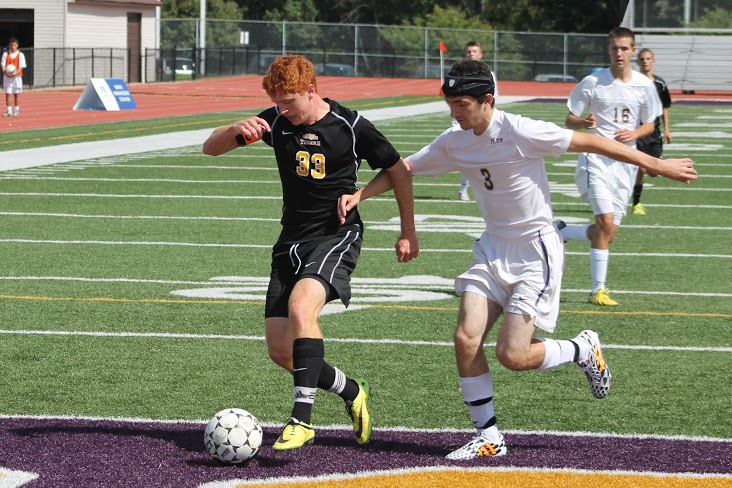 North Allegheny A Head Above Plum In 2-0 Win

The NA Boys’ Soccer Team traveled to Plum Saturday in a non-section match and got off to a slow start giving up two quick shots to the hosts in the first three minutes, but senior goalie Luke Nolan was ready and made the saves. At the 22:01 minute mark Josh Luchini was fouled, giving the Tigers a free kick taken by Alex Israel.  Israel’s kick was volleyed by Alex Gill in the box to captain Kevin Dougherty who torpedoed it home with a header goal putting NA up, 1-0. The balance of the half possessions was at a minimum as both teams seemed to be forcing play in the middle of the narrow Plum field.  The end of the half showed both the Tigers and the Mustangs with three shots and NA with the only corner awarded.

Early in the second half, North Allegheny started to string some passes and apply pressure and at the 34:45 mark was awarded a throw in. Jason Earle’s toss into the box was again headed by Dougherty to beat the Plum goalie and make it a 2-0 NA lead.  Coach Bobby Vosmaer turned the game over to his reliable bench with Sebastian Vasquez, Evan Gick and goalie Josh Krassenstein getting action, with Krassenstein making a nice save at the 9:50 mark to preserve the shutout.  North Allegheny had three shots in the period while allowing Plum only two.

Thanks to Dougherty’s heady play, the Tigers even their record to 3-3 overall with the 2-0 victory. Section rival Pine Richland comes to the Tigers Den this coming Tuesday, September 16 at 7:30 pm in a pivotal match.  We look forward to all soccer fans coming out to support the Boys’ Soccer Team!