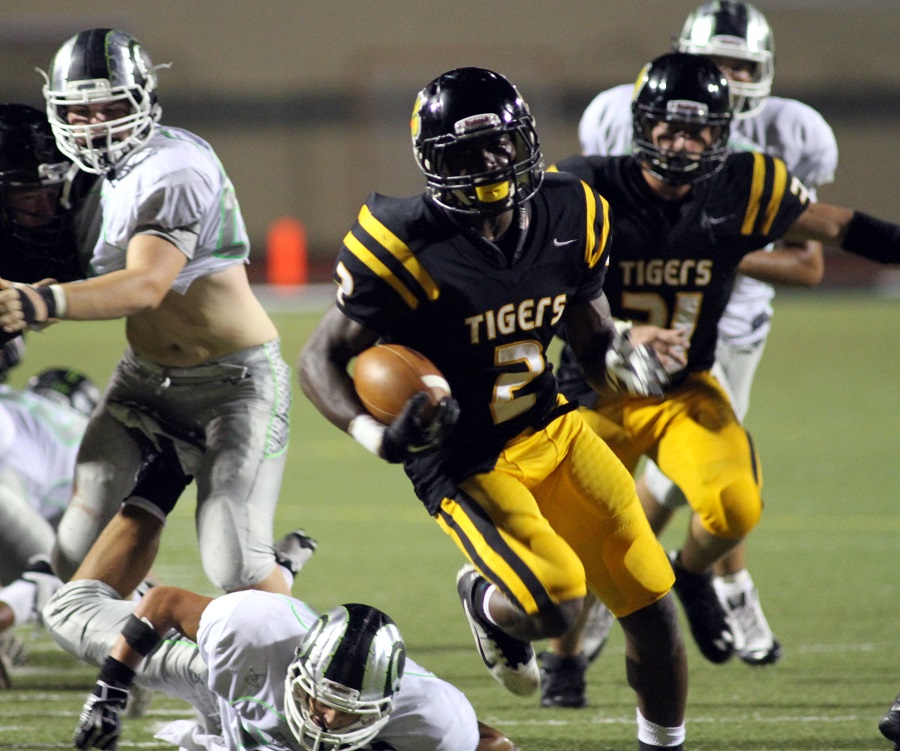 A 40-yard field goal attempt by Pine-Richland’s Ben Engel in the waning seconds fell short of the crossbar, and the North Allegheny Tigers hung on for an exciting, 29-28, victory over the Rams on Friday night in a Northern Eight Conference battle. The Rams outgained the Tigers 442-287 on the night and also held the edge in time of possession, but missed kicks and failed extra point conversions proved to be Pine-Richland’s undoing.

The Rams struck first with 2:49 on the clock in opening quarter on a 9-yard touchdown pass from Ben DiNucci to Mike Merhaut, but the trend of failed conversions came early as Pine-Richland went for two and came up empty, keeping the score at 6-0. On the ensuing kickoff, North Allegheny’s Clay Byerly raced 92-yards for a touchdown and a Tigers lead, 7-6.

In a see-saw battle, the Rams jumped back ahead early in the second quarter on a 34-yard field goal by Engel to grab a 9-7 advantage with 9:26 to go before halftime.  Once again, the Tigers quickly answered the Rams score with a seven-play, 68-yard drive that culminated on a 9-yard rushing touchdown by Sean Idowu to pull NA ahead, 14-9, with 6:26 on the second quarter clock. On the Tigers extra point kick by Seth Mancuso, the Rams were called for roughing the kicker, a 15-yard penalty that was assessed on the kickoff. With North Allegheny kicking from the PR 45-yard line, the Tigers employed a successful onside kick that was recovered by senior Fritz Isaac at the Rams 32-yard line.  Two plays later, Idowu, who rushed for 125 yards on 21 carries on the night, was in the end zone again courtesy of a 29-yard rushing touchdown and the Tigers held a 21-9 lead. Idowu was named the Wright Automotive Player of the Game by the North Allegheny Sports Network for his efforts in the victory.

With 42 seconds left before halftime, Pine-Richland trimmed the NA lead to 21-16 on a 13-yard touchdown strike from DiNucci to Anthony Battaglia. DiNucci completed 24 of 28 passes for 313 yards.

Following a Tigers turnover on their opening possession of the second half, Pine-Richland marched 73-yards on 10 plays, punctuating the drive with a 4-yard rushing jaunt by Connor Slomka to put the Rams in front, 22-21. Attempting another two-point conversion, the Rams attempt failed again, keeping PR’s lead at just one-point.

Undaunted, the Tigers recaptured the lead with 7:12 to go in the fourth quarter on a 15-yard touchdown pass from quarterback Jeff Clemens to Pitt-recruit Elijah Zeise. The same two players connected on the two-point try just moments later put NA ahead, 29-22. Pine-Richland threatened the Tigers once more with a seven-play drive that was capped on a 1-yard touchdown plunge by DiNucci on a quarterback sneak to trim NA’s lead to 29-28.  The Rams extra point kick went awry on a high snap to holder Mike Merhaut and the Tigers held on to their tenuous one-point advantage. Pine-Richland had one last chance to win the game on Engel’s 40-yard field goal attempt with 12 second to play, but the short kick by Engel ensured North Allegheny’s 29-28 victory.

With the win, North Allegheny improves to 3-1 overall and 2-1 in the Northern Eight Conference.  Pine-Richland falls to 2-2 overall and 2-2 in conference play. The Tigers will continue their section schedule next week with a visit to Butler to take on the Golden Tornado.

For a complete look at team and individual stats, click here.