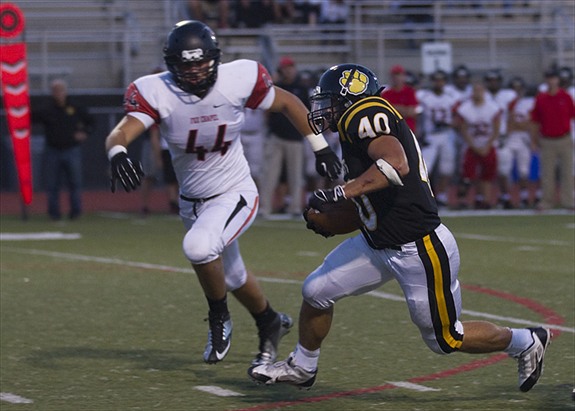 The North Allegheny Football Team (4-2) will try to make it four wins in a row tonight as the Tigers host the Fox Chapel Foxes (3-3) on Homecoming Night at Newman Stadium. The Tigers welcome in a Fox Chapel squad that has already won more games this season than it did in all of 2013. The Foxes are coming off a 43-10 win over Shaler last week, marking the first time since 2009 Fox Chapel has won back-to-back games. The Foxes also defeated Canon-McMillan in a non-section game two weeks ago.

North Allegheny most recently blanked Butler, 21-0, and held the Golden Tornado to 143 yards of total offense. The Tigers special teams opened the scoring last week on a 65-yard punt return touchdown by Michael Pope, and the NA defense sealed the deal with a 42-yard interception return for a touchdown by Ijhad Bonner in the fourth quarter.

Bonner and the Tigers defense will try to slow down the Foxes offensive attack, led by senior running back Carrington Vaughn. Vaughn is a Division I recruit who has totaled 415 yards on 74 carries and has totaled four touchdowns. The starting quarterback for Fox Chapel is two-year starter Billy Urso, an outstanding athlete who also plays on the Foxes basketball team. Urso has thrown for 915 yards and seven touchdowns, but has also tossed 10 interceptions.  Ball hawks like NA defensive back Riley Trueman, who has four interceptions this season, will certainly be looking to pluck one of Urso’s passes if the senior quarterback gets sloppy with the football.

The Tigers hosted Fox Chapel last season and pasted the Foxes by a 42-7 decision. NA quarterback Jeff Clemens threw for two touchdowns and Josh Bergman tallied a rushing score in the victory over a year ago.

Tonight’s contest between North Allegheny and Fox Chapel will get underway at 7:30 pm from Newman Stadium. Live pregame coverage, including a pregame interview with Tigers head coach Art Walker, will begin at 7:10 pm. Randy Gore and Andrew Heck will have the call on the North Allegheny Sports Network.  To listen to tonight’s broadcast, click here!