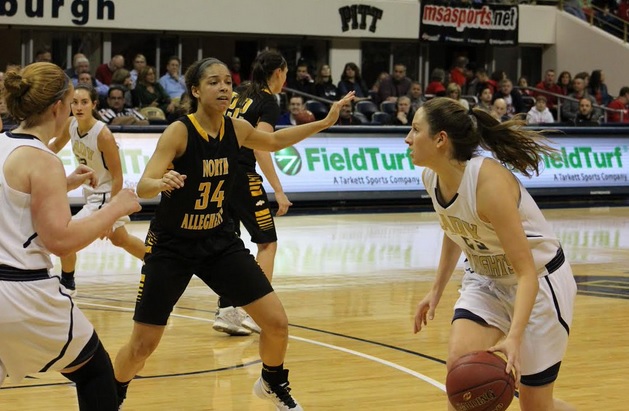 Trailing by 13-points entering the fourth quarter, the reigning WPIAL champion Norwin Knights mounted a furious rally to force overtime and defeated the North Allegheny Tigers, 63-57, at the Petersen Events Center on Saturday night. Norwin trailed most of the game and was down by as much as 16 points, but Taylor Sabol’s 3-pointer with 1:30 remaining in overtime gave the Knights a 58-55 lead that was not relinquished.

Playing in their first WPIAL title game since 1999, the Lady Tigers played near-flawless basketball through three periods and continued to rain down 3-pointers as they did in the semifinals against Penn Hills. North Allegheny poured in 7 of 15 from beyond the arc in the first half and 10 treys on the night. Four different Tigers connected from 3-point land with freshman Rachel Martindale and junior Hailey Zeise delivering three apiece. Martindale totaled 11 points and Zeise finished with a team-high 15 points. For her efforts on offense and defense, Zeise was named the Wright Automotive Player of the Game.

The Tigers defense frustrated and flustered the Knights in the first half and held Pitt recruit Alayna Gribble to four points in the first 16 minutes of the game. Norwin netted only five points in the second quarter with the last bucket of the half coming on a long-range 3-pointer by Jenna Cole at the buzzer to cut the NA lead to 31-18.

Norwin picked up the scoring in the third quarter but NA matched the Knights shot for shot as Taylor Lake notched a double-double with 12 points and 11 rebounds, and Piper Morningstar added 10 points. With North Allegheny leading 49-36 entering the fourth quarter, the Knights staged an astonishing rally that was spearheaded by Gribble and Dominique Petach. Held in check in the first half, Gribble scored 18 points in the second half and overtime, and Petach tallied 11 of her 13 points after intermission.  Down 55-53, Petach tied the game with a baseline floater with 2:42 remaining in the fourth quarter. Neither team could score again in regulation as the game went to overtime.

Both teams seemed to play nervously in the opening minutes of overtime, but eventually Sabol delivered the go-ahead 3-point bucket for Norwin for a 58-55 lead with 1:30 left in the extra session. The Knights capped the comeback with clutch shooting from the free-throw line for a 63-57 victory and back-to-back WPIAL gold.

The undefeated Knights sit at 25-0 on the season and will play Mt. Lebanon on Friday night in the first round of the PIAA playoffs. North Allegheny sits at 22-4 overall and will take on City League champion Obama Academy on Friday. That game will be broadcast live via the internet on the North Allegheny Sports Network.