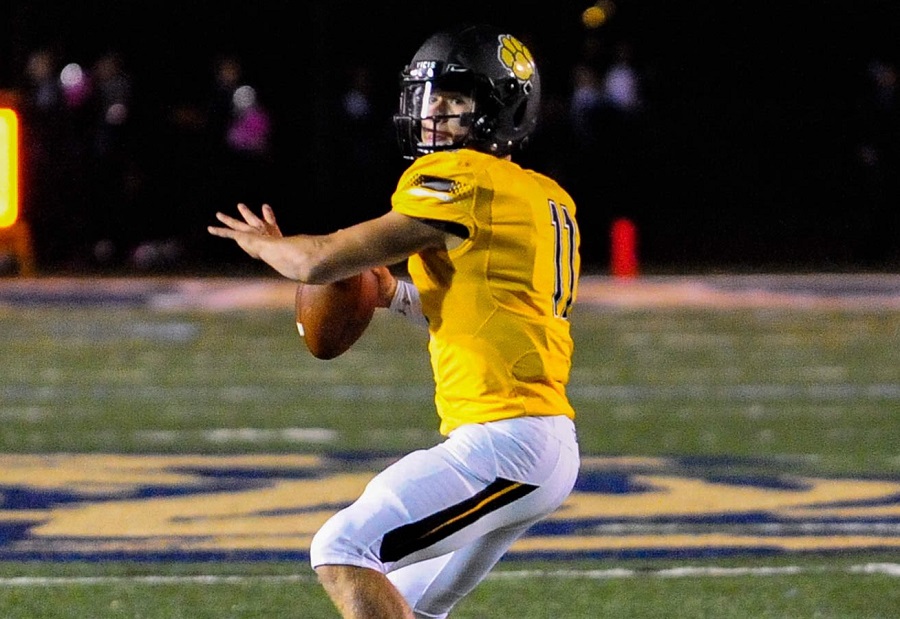 North Allegheny racked up 552 yards of total offense en route to a 62-35 win over Hempfield on homecoming night at Newman Stadium. The NA offense was literally unstoppable, scoring every time it touched the football with the only exceptions coming on the final possession of each half as time ran off the clock.

The 62 points is the most scored by North Allegheny since another shootout with Hempfield on Oct. 20, 2017. The Tigers won that contest over the Spartans, 63-28.

On the first play from scrimmage, Colella opened the scoring with a 56-yard touchdown run for an immediate 7-0 lead. After a three-and-out by Hempfield, Colella capped a seven play, 70-yard drive with a 28-yard touchdown catch on a Ben Petschke pass for a 14-0 advantage with 6:16 to go in the first quarter.

Hempfield answered back with a Blake Remaley 9-yard touchdown pass to Nathan Roby, trimming the NA lead to 14-7 with 1:59 remaining in the opening stanza.

The Spartans’ momentum was brief, however, as senior Percise Colon took the ensuing kickoff back 79 yards for a touchdown and the Tigers lead swelled to 21-7. While the game resumed shootout tendencies to the very finish, North Allegheny maintained a healthy advantage the rest of the way.

In the second period, fullback Brady Leczo muscled in for a 16-yard touchdown run and Colella scored on a 44-yard scamper, helping the Tigers to a 35-15 lead at intermission.

Petschke dazzled the crowd with one of the most exciting plays of the night, avoiding pressure on a Hempfield blitz and scrambling for an 80-yard touchdown run on NA’s first possession of the second half. Petschke added a 24-yard touchdown pass to Colella later in the third quarter for a 48-15 lead with 5:58 on the clock.

Junior quarterback Greg Phillips joined the scoring explosion and hit pay dirt twice in the fourth quarter with a pair of touchdown runs to help close out a 62-35 victory.

Just about everyone got into the act including the NA kickers as Brandan Persad, Hugh Du and Haleymae Graf all successfully kicked extra points in the victory.

To their credit, the Spartans piled up 435 yards of offense and battled to the very end. It was the first time that an opponent has even gone over 200 yards of offense against the Tigers this season. Roby led Hempfield with 187 yards rushing and two touchdowns, to go along with six catches for 34 yards and another score. Receiver Roman Pellis hauled in four passes for 114 yards and a score. Remaley finished with 190 yards passing and two touchdowns.

For North Allegheny, two players had over 100 yards rushing on the evening. Also hitting the century mark along with Colella was J.R. Burton with 106 yards on just eight totes. Petchke was 7 for 11 through the air for 141 yards and two touchdowns, to go along with his highlight reel 80-yard touchdown run.

The win keeps top-ranked North Allegheny undefeated with an 8-0 overall record and 7-0 mark in the Quad County Conference. Hempfield’s playoff hopes are officially dashed following the loss, falling to 2-6 overall and 1-6 in conference play. The Tigers will host West Allegheny in a non-conference contest next week.