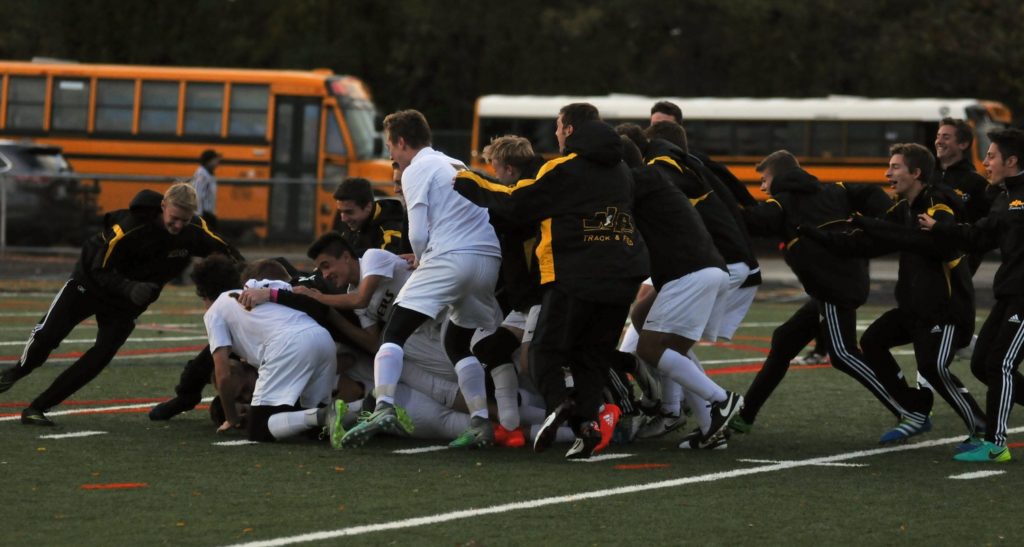 The North Allegheny soccer team has been playing close games all year so it was no surprise their first round playoff game against Fox Chapel was decided in overtime.  The Tigers’ Sam Buirge scored with 6:07 left, assisted by Sean Atwater, to send North Allegheny to the second round with a 2-1 victory. (Video of Buirge’s goal is below.)

The Tigers controlled play for the first several minutes creating a couple of scoring chances. Roman Rainville was stopped from point blank range and Ben Cinker just missed wide on another shot.  Fox Chapel got the offense going and scored in the 18th minute off a corner kick from Nathan Wecht.  Will Tabor was able to head it in on the short side to give Fox Chapel a 1-0 lead.

North Allegheny came out strong to start the second half and tied the game at 1-1 ten minutes in when Owen Leonard put a shot on goal that slipped through the hands of Foxes goalie Jakob Dunn.  Leonard’s goal was assisted by Jack Passodelis.

The Tigers continued to pressure, getting strong play from Passodelis and Leonard.  In overtime, Cam Yurick looked like he would end it two times but once shot high, and on the second try, the goalie made a great save. The winning goal scored by Buirge was set up by three very good passes inside the eighteen yard line. Buirge was named the Wright Automotive player of the game for his efforts.

The Tigers will now play on Wednesday against Peters Township in the WPIAL quarterfinals.