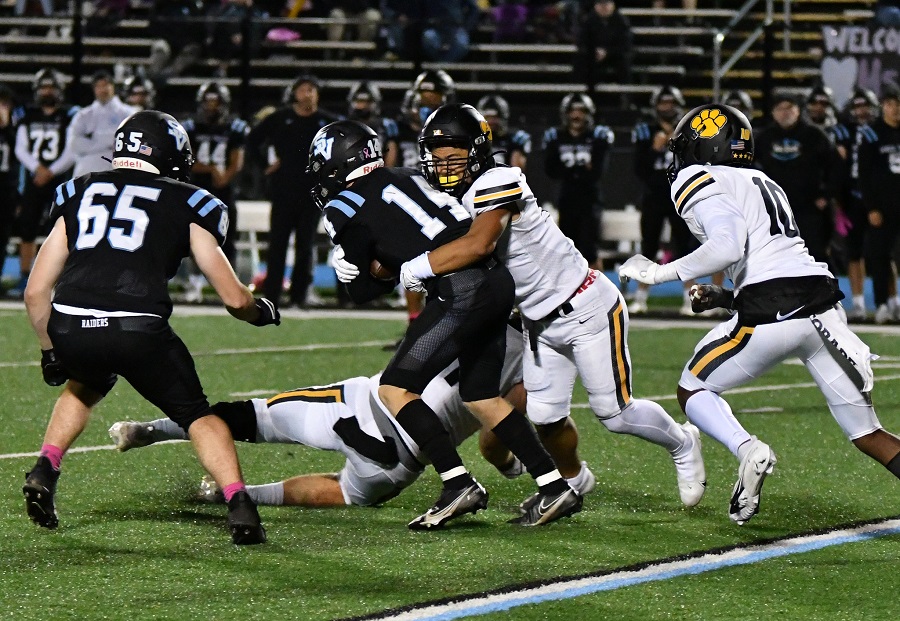 An interception and two fourth down stops at the 2-yard line by the Seneca Valley defense helped the host Raiders fend off the North Allegheny Tigers on Friday night, 17-12, in the regular season finale at NexTier Stadium. The outcome secures the No. 3 seed and a bye into the semifinal round for the Raiders in the upcoming WPIAL Class 6A playoffs. The Tigers will be the No. 4 seed and will host fifth-seeded Canon-McMillan in the quarterfinal round next week at Newman Stadium.

In the first quarter, the Tigers owned the better of the field position and put together a drive on their second possession of the night. A 39-yard pass by sophomore quarterback Logan Kushner to senior receiver Dwayne Taylor set North Allegheny up with a 1st and goal from the Seneca Valley 5-yard line. The 1st and goal soon turned to 4th and goal and a run by Harron Lee was stuffed at the 2-yard line, denying NA an opportunity to take the early lead with 4:03 left in the first quarter.

After a scoreless opening stanza, Seneca Valley put together a 4-play, 74-yard drive that culminated on a 19-yard flea flicker pass by sophomore Sean O’Shea to Luke Lawson in the end zone with 10:35 to play in the second quarter for a 7-0 lead.

Later in the quarter, North Allegheny responded with a 9-play, 56-yard drive that was capped on a 4-yard touchdown pass from Kushner to Taylor with 4:36 left before halftime to even the score at 7-7. Kushner completed 16 of 29 passes on the night for 210 yards, one touchdown and one interception.

The Raiders had a chance to regain the lead just before intermission but a fumble recovery by Nick Frisco at the NA 17-yard line with 1:16 left in the half thwarted the SV drive and kept the game deadlocked at 7-7 going into the locker room.

Seneca Valley opened the second half with an 8-play, 41-yard drive that began at the Raiders 47-yard line. The march stalled, however, and Seneca Valley settled for a 29-yard field goal by Camden Bush for a 10-7 lead with 9:42 to play in the third quarter.

On the ensuing possession, North Allegheny answered back with a 19-yard field connection from Lee to tie the score at 10-10 with 3:56 remaining in the period.

It appeared the Tigers might pull ahead when Taylor intercepted an O’Shea pass on Seneca Valley’s next possession and returned the ball 10 yards to the SV 35-yard line. The interception was Taylor’s team-leading third on the season. However, on the very next play, the Raiders Wayne Pirt picked off a Kushner pass at the Seneca Valley 9-yard line and the game remained tied 10-10 at the end of three quarters.

In the fourth quarter, Seneca Valley’s running game gained controlled as senior running back Nolan Dworek spearheaded a 15-play, 91-yard scoring drive. Dworek punctuated the possession with a 4-yard rushing touchdown to pull the Raiders ahead, 17-10, with 6:38 left in regulation. Dworek finished with 137 yards on 28 carries on the night. 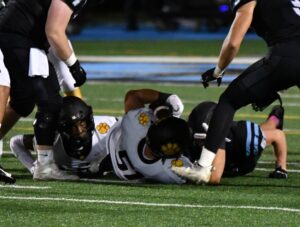 Nick Frisco recovers one of two fumbles against Seneca Valley.

North Allegheny’s next drive traversed to the SV 18-yard line but the Tigers couldn’t convert on a 4th and 6 pass attempt and the Raiders defense held. After Frisco recovered his second fumble of the night at the Raiders 35-yard line with 1:26 left to play, the Tigers had one last chance to draw even.

A 23-yard pass by Kushner to senior Cole Dorn set North Allegheny up with a 1st and goal from the SV 6-yard line with 56 seconds left. Three plays later, North Allegheny was faced with a 4th and goal from the 2-yard line. A run by Kushner was stopped at the line of scrimmage with two seconds remaining and the Raiders defense held. Seneca Valley took a safety on the final play of the game to bring the final score to 17-12, Raiders.

On defense for North Allegheny, defensive back Kolin Dinkins led the team in tackles with 10 stops on the evening. With two fumble recoveries, Frisco was named the Wright Automotive Player of the Game.